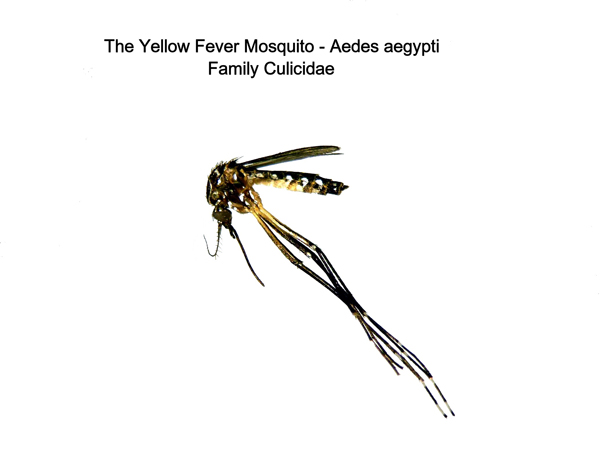 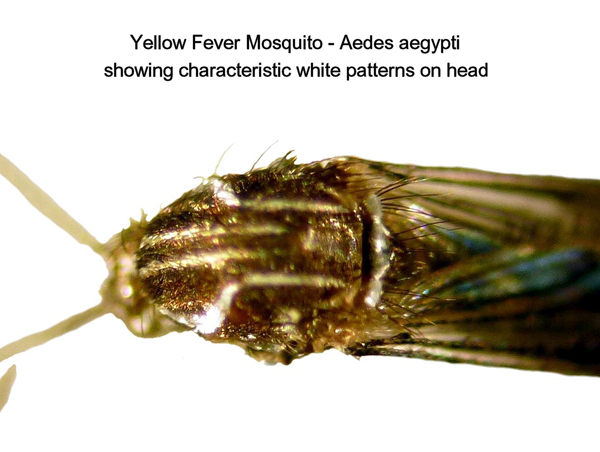 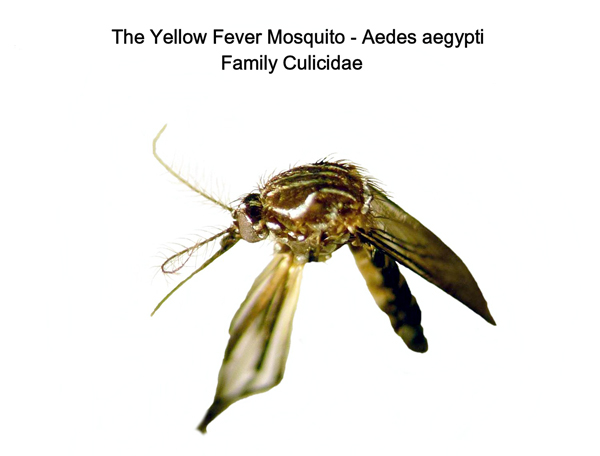 This species is found throughout the world in tropical regions, its true origin not well known.

This is the infamous species that interfered with the completion of the Panama Canal, infecting up to 85% of the workers before the link between the mosquitoes and the diseases, including malaria, was firmly established and eradication efforts took place in 1904. The adult females feed primarily at dusk and at dawn. Eggs are deposited singly in small containers of water, including basins in plants such as bromeliads, old tires and other artificial containers, and small areas of stagnant water including drainage ditches and abandoned swimming pools.

The adult mosquito has black scales over its entire body along with silvery white scales as bands around each segment of the abdomen and at the base of each segment of the legs. On top of the thorax white scales form thin lines in the shape of a violin, as two broad stripes curving around the sides and two thin stripes down the middle of the top. This separates aegypti from the similar albopictus (Asian tiger mosquito) which has a single broad white stripe down the middle.

Very important is elimination of breeding resources in landscape, such as discarded containers on the ground, plant containers, rain gutters, bird baths, etc. Larvae feed on organic matter in contaminated water and do not survive in clean water. Discarded tires are a major breeding site, and these should be removed and recycled or drained of water, including drilling holes in old tires to prevent capture of water. Sites that cannot be drained may be filled or treated with larvicides. The wearing of long sleeves and repellent when active outdoors are important measures to prevent bites. Adult mosquitoes can be minimized with fogging for short-term control or barrier treatments of resting sites for longer term control.