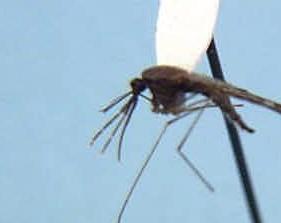 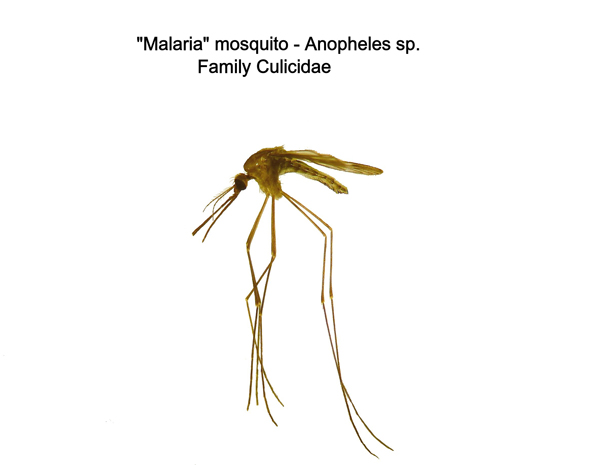 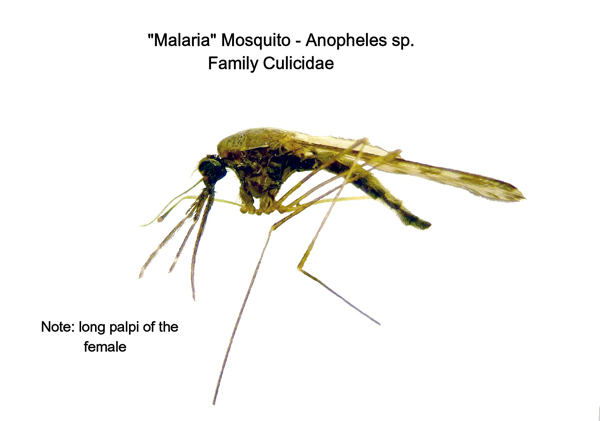 Approximately 16 species in North America, most considered native to the continent.

The genus Anopheles is the primary vector of malaria throughout the world, feeding on both humans as well as other warm-blooded mammals. A. quadrimaculatus and A. freeborni are two of the principal species in the U.S. Preferred oviposition sites by females will be fresh, clear water in ponds or slow-moving creeks, with vegetation along the edges. Eggs are laid singly on the water surface, and each egg has floats on either side of it. Females lay around 250 eggs, and for these two important species the fertilized females are the over-wintering stage. They may emerge on warm winter days to feed, but wait until spring to lay eggs.

Adult females are distinct from other mosquitoes in that their palpi are as long as their proboscis. Females can be distinguished from males as males have very bushy antennae. In general, Anopheles mosquitoes are separated from other species by the lack of scales on their bodies, having hairs instead. The scutellum is evenly rounded along its posterior margin, and a row of hairs along this margin is evenly spaced. Larvae of Anopheles can be distinguished from all other mosquito larvae by the lack of a breathing siphon.

The use of larvacide surface oils or alcohol-based surface films is effective in smothering larvae and pupae. Aquatic applications of growth regulators and bacteria products are effective in killing developing larvae. Habitat modification by eliminating water environments in containers is needed in urban areas, and draining of temporary pools done where possible. Non-chemical control in small bodies of water can also be effective with the use of mosquito fish. Adult control may be done on a wide scale with aerosol fogs or aerial applications, and some relief from adult populations can be achieved with surface applications of residual, contact insecticides on a small scale.