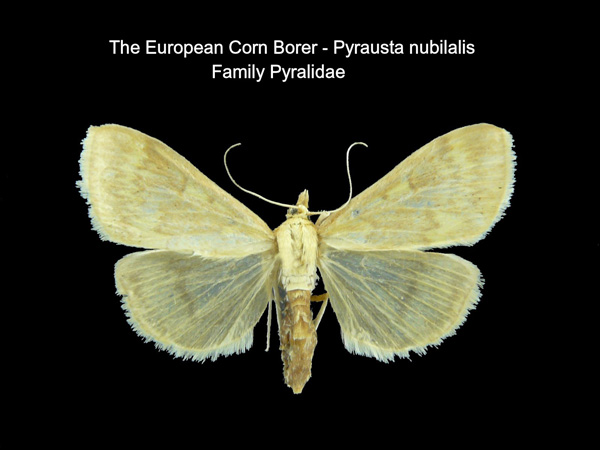 This species is native to Europe, but was introduced to the U.S. in the early 1900’s with infested plant materials grown for making brooms. It now is common throughout North America east of the Rocky Mountains.

This moth is a serious pest of corn, but also feeds on oats, barley, beans, potatoes and other agricultural crops as well as many ornamental plants. It is known to feed on over 200 varieties of plants. Females deposit up to 600 eggs on the undersides of leaves in small clusters of 15-20 eggs. The larvae feed first on the tassels and leaves and later by burrowing within the stem between the corn stalk and the developing ear. They overwinter as the late stage larva in a cell in the soil and pupate in the spring. In northern regions there is a single generation each year, but 3-4 generations annually in the South.

The adult moth has a wingspan of about 1 inch and is a yellow-brown to tan color on all wings. The forewings have darker wavy lines and bands running across them from top to bottom. The male moth has much darker lines and bands and the female tends to be more of an overall light color. The larva is a grayish pink color.

This is primarily an agricultural pest, but if found causing damage to ornamental plants can be killed with labeled contact insecticides.