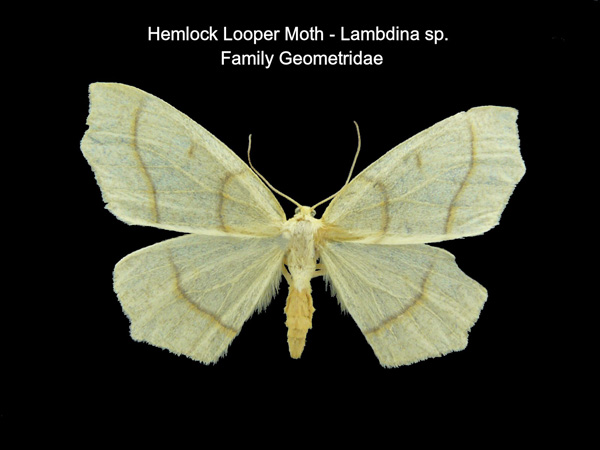 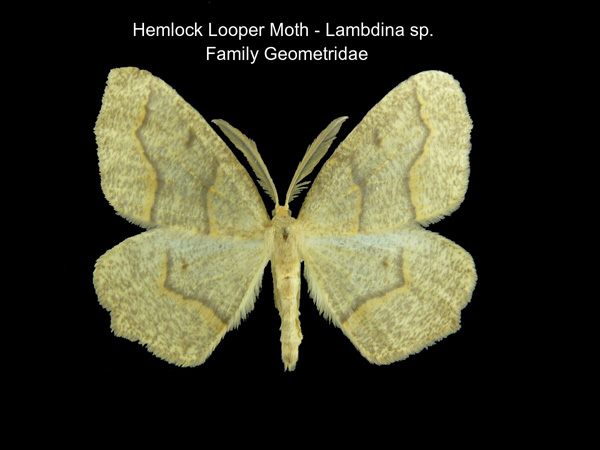 This is a native insect in eastern North America.

This genus of 9 North American species includes The Hemlock Looper, Lambdina fiscellaria, a potentially destructive species of the eastern half of the U.S. as well as in the Pacific Northwest and into Alberta and British Columbia. Severe outbreaks can result in defoliation of the trees, leading to their death within a couple of years. They feed on many conifers including hemlock, fir, spruce, cedar, and pines, as well as hardwood trees such as maple, elm, birch, and cherry. Female moths deposit eggs in late summer and the eggs overwinter, hatching in late spring. The larvae feed on many needles, often eating only a small part before moving to another needle, but causing the death of all needles fed upon.

Mature larvae are about 1.25 inches long and vary in color from tan to green to almost black. There is a broad light brown stripe down the back and several dark lines along each side. Like other “inchworms” the middle prolegs are not present, and the larva moves in the characteristic method of placing its front legs forward and drawing its hind legs up, creating a high arching body. Adult moths have a wingspan of about 1.5 inches and color varies from cream to tan to orange to brown, but always with 2 darker lines crossing the forewing, with the outer line continued across the hind wing.

Foliar applications of contact insecticides will kill the larvae as they feed, and should be applied when larvae are first noted on the trees. The bacteria Bacillus thuringiensis is also effective but may require repeat treatments due to the prolonged emergence of the larvae from the overwintering eggs.