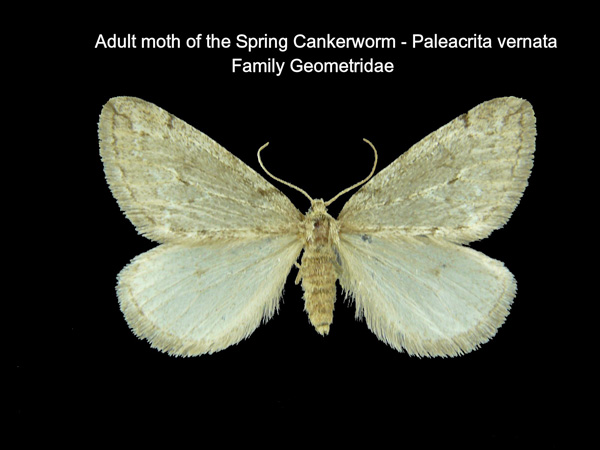 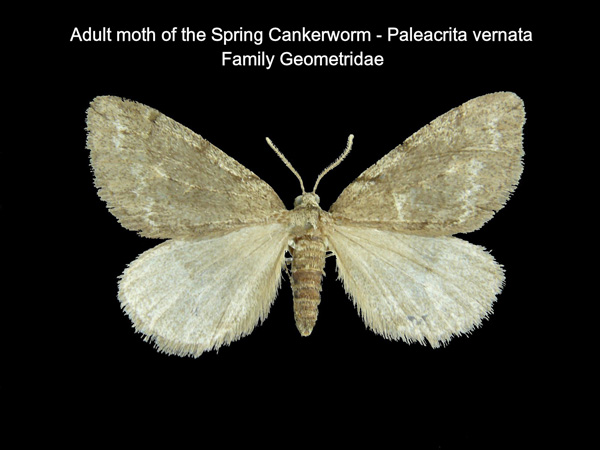 This destructive moth is found widely throughout the eastern half of the U.S. as well as in California and southern Canada. The females are wingless and deposit up to 250 eggs in clusters in crevices on the bark and stems of the trees they originated on, emerging in early spring from pupae buried in the ground. There is a single generation each year. The larvae feed on a variety of deciduous shrubs and trees, but can be particularly damaging to elm, maple, and members of the rose family such as apple, plum, and pear. When they first emerge from the eggs the larvae may “balloon” to adjacent trees by spinning silk that then carried by wind. It is reported that English Sparrows were actually introduced to the U.S. to feed on these caterpillars.

The female is wingless and gray. The male has a wingspan of over 1 inch and is gray to brownish gray in color. The wings have various degrees of black spots and dashes on them. The larva is slender, gray to light brown, and with darker and lighter bands running front to back.

Foliar applications of contact insecticides will kill the larvae as they feed, and should be applied when larvae are first noted on the trees. The bacteria Bacillus thuringiensis is also effective if applied when the larvae are actively feeding on the foliage.