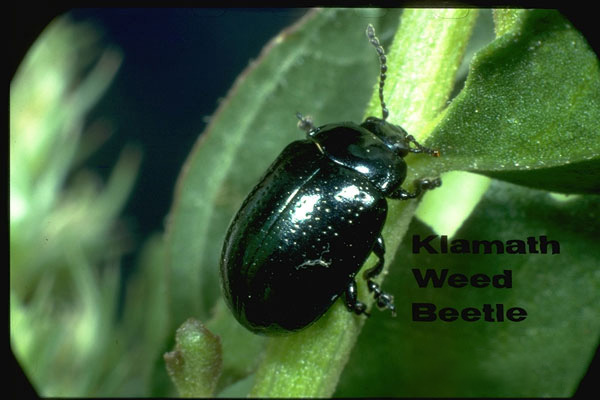 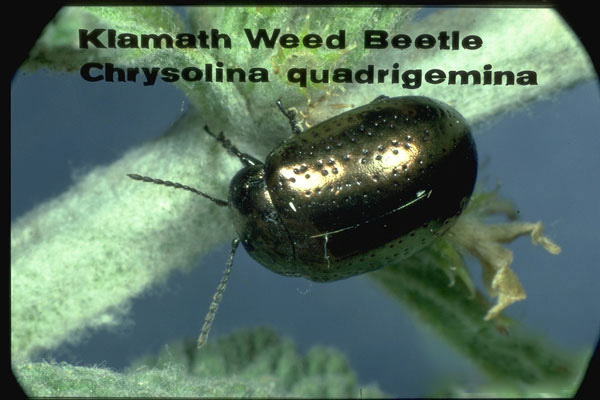 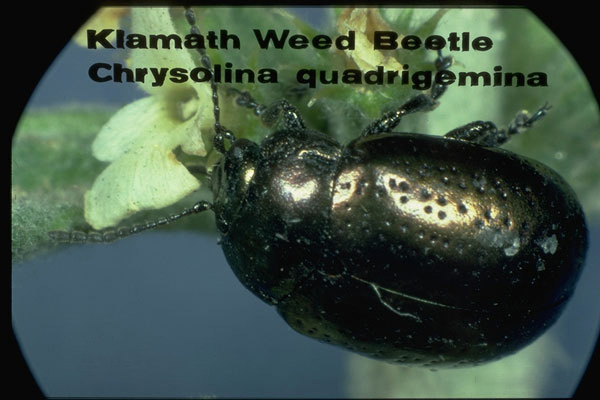 These beetles are native to Northern Africa and Europe.

This is one of two nearly identical species of beetles imported from Europe for control of the noxious weed St. John’s Wort (Hypericum performatum), also referred to as Klamath Weed. While this plant is used commercially it also is an introduced weed in North America and many other continents and has become an invasive weed. Livestock that feed on the plant develop skin that is highly sensitive to sunlight, forming blisters, scaps, and they lose weight. In western United States the weed overwhelmed over 400,000 acres of open range before the beetles were introduced in 1944. The beetles have helped reduce the spread of the weed but also feed on ornamental Hypericum, which is related to St. John’s Wort. Both adults and larvae feed only on Hypericum plants. The adults overwinter in the soil and emerge in mid spring to feed heavily on the plants before entering a long summer aestivation. They mate in the fall, the larvae feed before moving into the soil as older larvae, they pupate and then become adults before emerging in the spring. There is a single generation each year.

The adult beetles are 3/8 to ½ inch long and range in color from a shining metallic green to blue to almost greenish black. The wing covers are almost smooth but have rows of very small punctures running their length. The beetle overall has a very rounded, cylindrical shape, with the thorax narrower toward its front and the head narrower than the thorax. The antennae are long and thin.

If the beetles are damaging valuable ornamental hypericum they may be killed with contact insecticide sprayed onto the plants. Otherwise, this valuable biological control insect should not be killed.