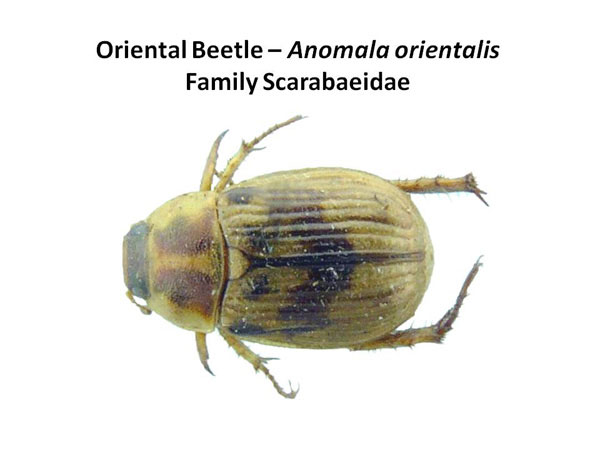 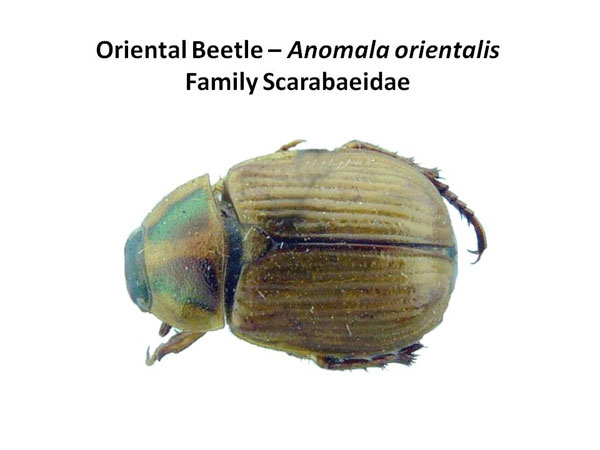 This beetle is native to eastern Asia and was introduced into the Hawaiian Islands on the island of Oahu before 1908, where it has been a serious pest of sugarcane. It was then found in the mainland U.S. in 1920 in Connecticut, presumably in nursery stock from Japan. It now ranges from North Carolina to the New England states.

The adult beetles do little damage with their minor feeding on flowers, but the larvae are potentially serious turf pests, with over 50 grubs per square foot commonly found. The larvae overwinter as the last stage, feed again in the early spring and pupate in June. The adult beetles are then present through the summer months and are active in the daytime.

The adult beetle is about ½ inch long and with the typical scarab beetle shape of well-rounded elytra, rounded thorax flattened at the sides, and antennae composed of several small, short segments followed by a terminal club of several segments elongated on one side to form a fan-like end. The adult beetles vary greatly in their coloration, from solid black to solid tan to varying degrees of tan and black striping and patches on the thorax and elytra. The larvae have the characteristic C-shape of white grubs and can be identified as this species by the rastral patterns of setae and ridges on the end of the abdomen.

In Hawaii an introduced parasitic wasp controlled the problems on sugarcane, but in non-tropical states this wasp is not a factor. Contact insecticides can be applied to turf to kill the larvae, timed to when the larvae are feeding in the root zone of the turf grasses. Granular insecticides can be very effective once watered in to move the active ingredient into the soil.