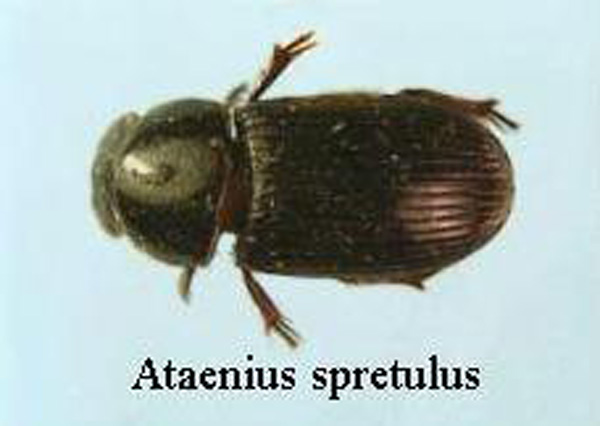 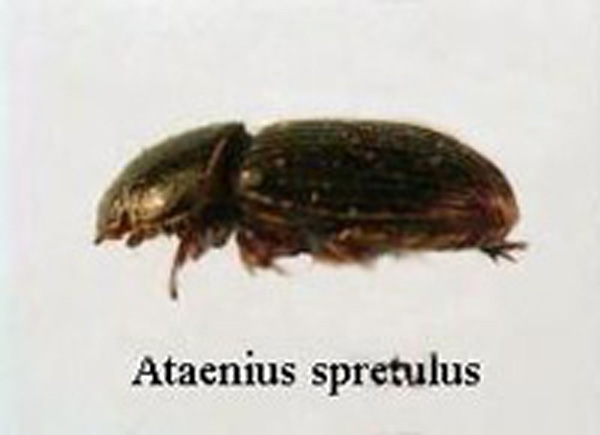 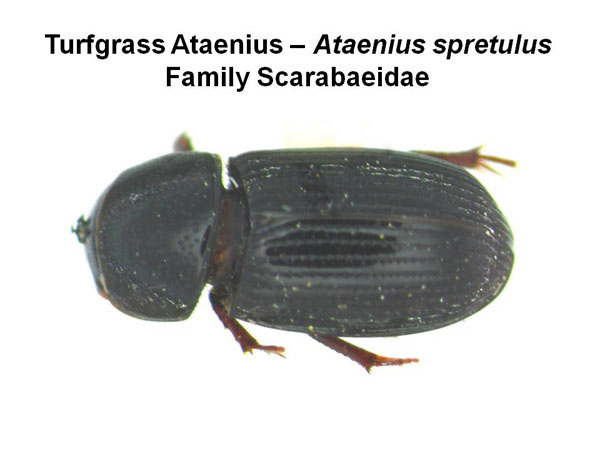 This species is one of over 63 species in North America in the genus Ataenius, but most species are not pest problems, feeding on a variety of organic materials including animal dung, decaying plant materials, and others. The black turfgrass ataenius is a turf pest that is found throughout the U.S. and southern Canada, with most southern and western states only reporting it as present there. The most serious damage to golf course turf occurs in the upper northeastern regions from Colorado to Minnesota to the east coast south to Virginia. It is primarily a golf course pest as it feeds on the roots of bluegrass and bentgrasses. The larvae feed on the roots, leading to wilting and then death of the turf in small to large patches. There are 1 or 2 generations per year depending on the latitude. Only the adult beetles overwinter, usually in the soil or beneath materials at the edges of wooded areas and perimeters of fairways. These adults then emerge early in the spring to return to the turf areas, burrow into the soil and deposit eggs. The adult beetles feed on decaying organic matter in the soil.

Adult beetles are very small, about 6 mm long and shiny dark brown to black. They are cylindrical with nearly parallel sides to the wings and thorax and the head is very short and almost hidden from view from above. The larvae are also only 6 mm long and are white and elongate.

A proposed tolerance level for these beetles is 50 grubs or less per square foot, and above that number control measures should commence. This sample can be taken beneath turf at the border of dead patches where the larvae are still feeding on live roots. Healthy turf can tolerate many of the larvae, and spring and fall fertilizing along with watering during dry periods will help. Late spring through summer applications of contact insecticide, watered into the top layer of soil, can help to kill many grubs.