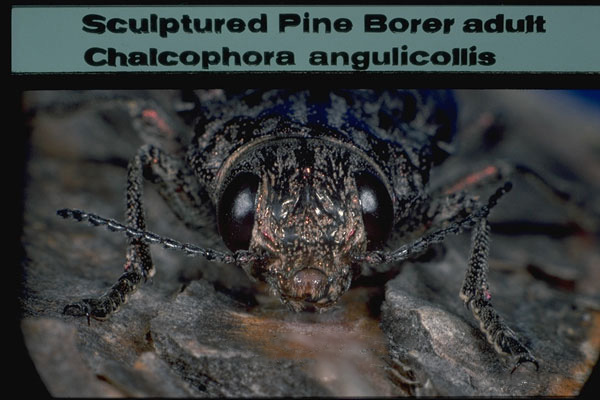 This large species of beetle represents just one example of the many species in the family Buprestidae. It is found widely across the eastern U.S. and southern Canada and south into Central America. It generally attacks only dead or dying pine trees, feeding as a larva for several years under the bark before pupating and emerging as the adult beetle.

Adult beetles may be up to 1.25 inches in length and are a dark, shining gray color with mottled patches of lighter colors on top. They are flattened from top to bottom and elongate oval in shape, with the wings (elytra) forming a pointed tip at their posterior end. The large larvae are typical of flat headed borers, being flattened and with the thoracic area widely expanded and the remaining abdomen and body being quite narrow. The feeding galleries under the bark will be oval in profile and filled with the sawdust-like frass as the larvae moves along. Oval emergence holes of the adults will be found on the bark of infested trees.

Generally there is no reason to control this beetle as it attacks primarily dead or dying trees. If control is necessary it may be possible to use systemic insecticides injected into the trunk of the tree.