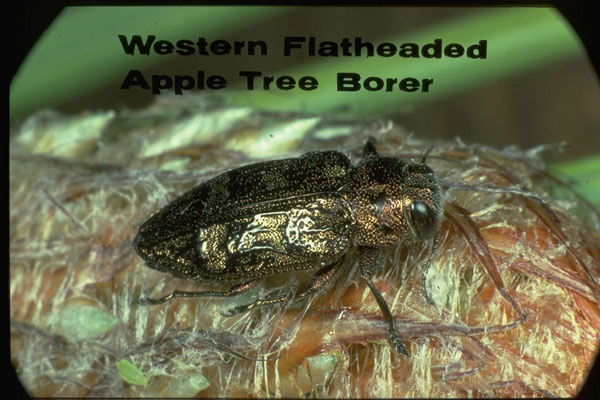 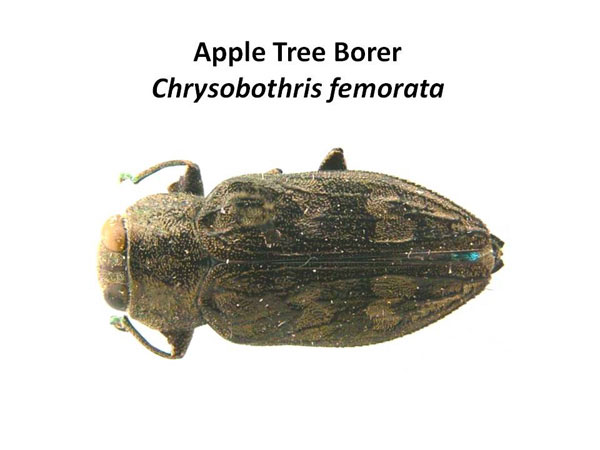 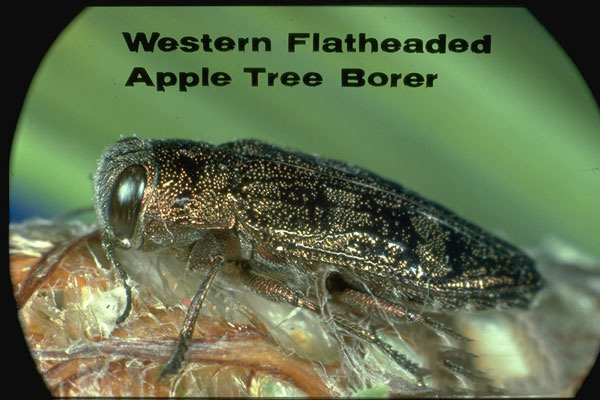 Despite its common name apple trees are just one of dozens of different kinds of trees that this pest beetle infests. The list includes most fruit trees, hickory, oak, elm, chestnut, hawthorn, redbug, sycamore, maple, poplar and many others. It is found from Mexico to Canada and throughout the United States. Adult beetles are most common during late spring when the females may be observed sitting or running over the bark of trees. Each female deposits about 100 eggs into crevices and holes in the bark. The larvae then feed in the cambium and sapwood of the tree, effectively girdling the tree with heavy infestations, and potentially leading to the death of the tree. The larvae create a chamber in the sapwood and spend the winter in it, pupating in the spring and emerging as adults.

Adult beetles are dark gray with a metallic sheen on top and a coppery bronze beneath, with lighter colored sculptured bands across the elytra on top. They are from ¼ to nearly ¾ inch long. The larvae are typical of flat headed borers, with elongate white bodies that are flattened, and with the first 3 segments of the thorax behind the head much wider than the rest of the body. The feeding galleries under the bark will be oval in profile and filled with the sawdust-like frass as the larvae moves along. Oval emergence holes of the adults will be found on the bark of infested trees.

Control is difficult once the larvae are feeding within the tree, but may be killed by systemic insecticides injected into the trunk. Adult beetles may be killed if contact insecticides can be applied to the trunk timed to the first presence of the adult beetles. Healthy trees are generally able to withstand the presence of some of the larvae, so good tree health is important. A number of parasitic wasps also help to reduce the numbers of larvae that survive in the tree.