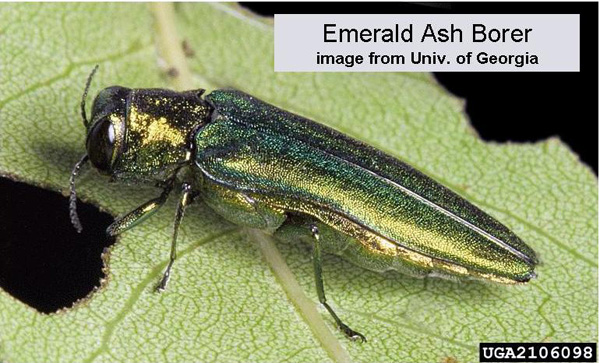 It is a native of eastern Asia and is believed to have entered North America in wood packaging materials.

This destructive pest was first discovered in Michigan in 2002 but rapidly spread throughout the entire Northeast of the U.S. and into southern Canada. It attacks all species of ash trees and has resulted in the death of tens of millions of these trees since its discovery. Unusual for beetles in this family both adults and larvae feed within the tree, consuming the cambium and causes tree death from girdling. Also odd is that the adult male beetle tends the larvae to some extent until they have pupated. Adults are active in late spring to early summer when the female deposits eggs into crevices in the bark of the tree. The larvae then bore through the bark and live within the phloem (water conducting) tissues in the cambium.

For such a destructive insect this beetle is very attractive. It is only about 1/3 inch long but it is a deep metallic green color. It is cylindrical and narrow. The thorax often has a metallic coppery sheen to it. The larvae are typical of flat headed borers, with elongate white bodies that are flattened, and with the second segment of the thorax behind the head wider than the rest of the body. The feeding galleries under the bark will be oval in profile and filled with the sawdust-like frass as the larvae moves along. Oval emergence holes of the adults will be found on the bark of infested trees.