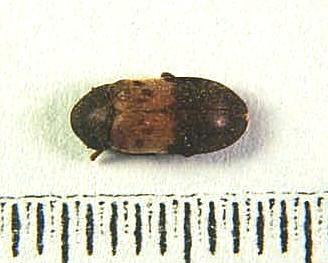 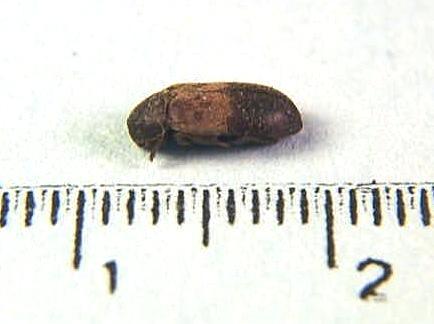 This beetle is found throughout the world, including in all of North America, where it is no longer found commonly as a food pest. This may be due partly to the better storage of meat products, which were often subjected to attack by this beetle.

Typical of the family Dermestidae, the Larder Beetle attacks a very wide variety of products, from meat to grain products, cheese, tobacco, cereal and pet food products, as well as scavenging on dead insects and animal byproducts such as hair or wool. Females lay around 150 eggs in the food material or in crevices nearby. The larvae feed until they have completed 5 to 6 molts and are ready to pupate, at which time they often move from the food and wander off to find a protected place to pupate, often boring into solid materials for this stage. Development from egg to adult normally takes about 45 days, and one generation per year is normal.

The Larder Beetle has distinct coloration on the adult, with the prothorax and posterior half of the elytra dark grayish brown, and the front half of the elytra yellow. Six dark spots appear on this yellow area. The shape is somewhat elongate and oval and around 8 mm long, fairly large for stored food pests.

The Larder Beetle has become less of a pest of importance with the proper storage of meat products, although it also feeds on dead insect accumulations in structures, and its presence may be linked to this type of a source. Inspection to determine the source of the beetles and disposal of the infested material are necessary.