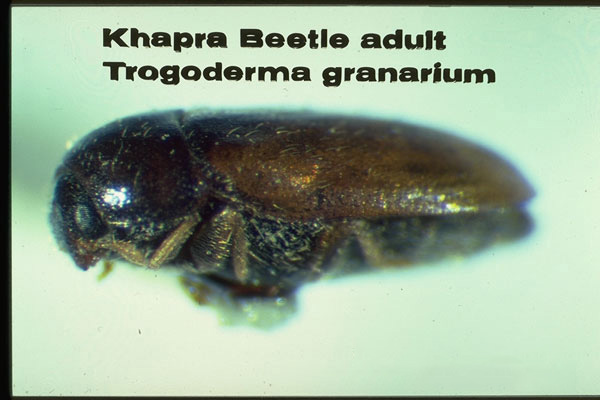 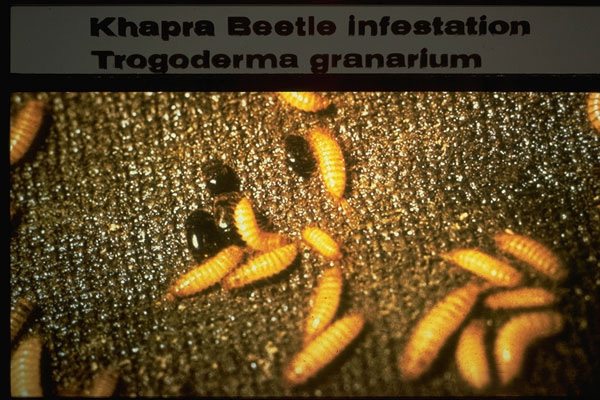 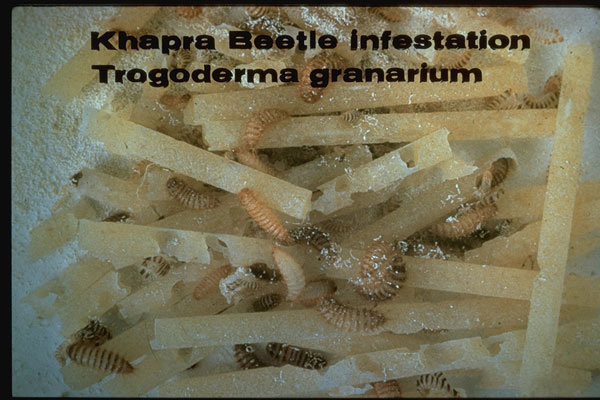 Native to India, but now present throughout the world where aggressive eradication efforts are not made. It was first discovered in the U.S. in California in 1953, possibly present for several years before that, and at this time it still remains eradicated from North America.

The Khapra Beetle is one of the most feared of all stored grain product insect pests, based on its wide choice of foods, its reproductive potential, and its adaptability. Feeding damage is done only by the larvae, but they can feed on products too dry to sustain other insects, survive very cold temperatures, and live up to 3 years without feeding. There are also confirmed cases of humans suffering from severe intestinal pain following consumption of the shed skins of the larvae, due to the hairs on these skins. Each female beetle lays around 100 eggs, and development to the adult stage can be anywhere from 1 month to several years. Adults cannot fly and may live only a few days or up to several months. Grain and cereal products are the preferred foods, but the larvae also feed on the many possible materials made from animal hair, as well as on dead insects or other animals.

As with the common carpet beetles the importance of finding the source of the infestation is high, as it usually is in a hidden location and not likely to be contacted by sprayed pesticides. Susceptible foods, clothing, decorations and furnishings must be inspected for the presence or evidence of the larvae, and the storage of these materials in a manner that excludes the pest is very successful in preventing damage. If the Khapra Beetle is suspected in an infestation, it should be reported immediately to the local Department of Agriculture.