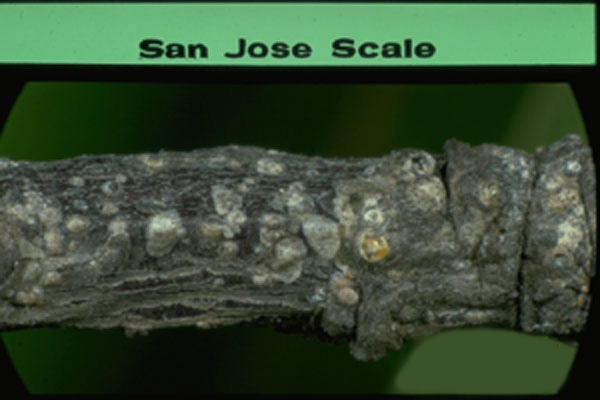 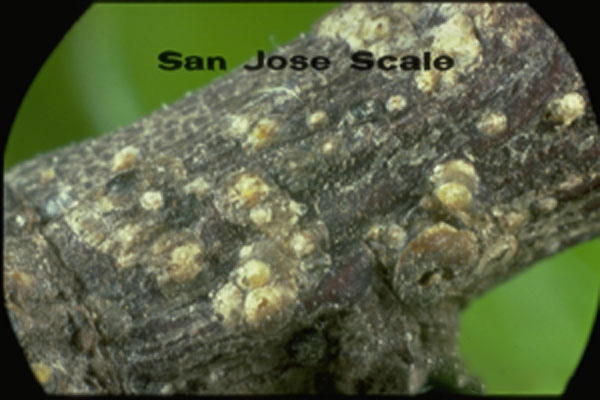 Native to the Orient, and introduced on imported plants around 1870, where it was discovered in the area of San Jose, California. It since spread throughout the U.S. to become a devastating pest on fruit trees such as apple, plum, pear, cherry, peach, gooseberry, apricot, and others. With the introduction of DDT and other persistent insecticides in the 1940s this scale nearly disappeared from crops, but has since begun a resurgence due to lack of management and decreased spraying.

The scales attack foliage, stems, and developing fruit, causing discoloration of the fruit and dieback of twigs and branches. With heavy infestations an overall loss of health causes entire trees to die. The overwintering stage is the second instar, which is fastened to the bark of the tree. With warming weather it resumes its growth and about the time the tree blossoms the mature males and females are present. Males emerge from under their wax scales to mate, and the females then begin to produce living nymphs, which emerge from under the female’s scale as the mobile crawler stage. Females will continue to produce young for about 6 weeks. The crawlers move to new locations and within a day insert their mouthparts into the tree, shed their skin to lose their legs and antennae, and form a new wax shell over themselves in this permanent location. They mature in around 2 months and up to 3 generations occur each year.

Mature females are round, about 1.4 mm across, and white with a raised gray knob in the center of their wax shell. Mature scales of the males are elongate and whitish, with a raised darker spot at the wide end. When the male emerges for mating it resembles a minute, 2-winged wasp. Crawlers are extremely small, yellow, and mobile.