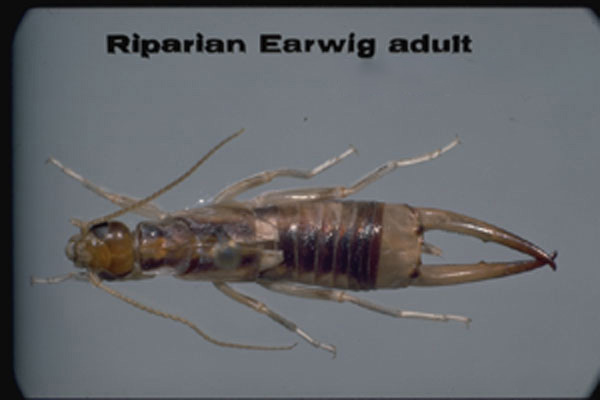 This is a cosmopolitan species that is found throughout the world, often occurring near aquatic habitats. Despite its status as a “pest” it is a voracious predator that feeds on many other insects and mites, with reports that it can eat up to 20 armyworm caterpillars in one night, or consume 25 scale crawlers in 60 seconds. It also feeds on aphids and in lab settings would consume any other insect offered to it, grabbing the prey insect with its forceps and then eating it with its mandibles. It feeds on plant materials only when no living prey is available and it is considered a beneficial insect. As with other earwigs the female lays a clutch of eggs in a protected cavity, guards them, and moves them and cleans them as needed to ensure their health. Eggs hatch in about 2 weeks and adults live for about 5 months. When handled the earwig will emit a foul-smelling oil that resembles the odor of tar. They are capable of flight but rarely do fly. They often will be found along the edges of ponds or seashore.

Adults are large earwigs that are tan to dark brown, with flight wings tucked tightly under the small forewings that shield them. Adults grow to about 1 inch in length.

This species is considered beneficial and should not be killed.