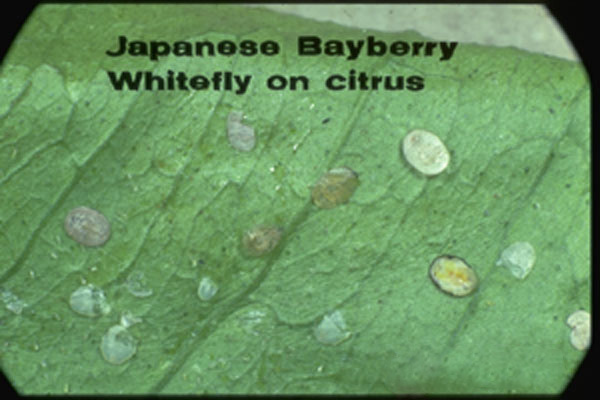 Likely of Asian origin, as it was first described from Japan, and is found from China south through Malaysia, in Israel and Venezuela, and in the U.S. only in California and Florida.

Potentially a destructive pest on citrus, but generally kept under control by a natural wasp parasite that appears to have been introduced with the whitefly when it entered the U.S. It has a fairly wide host range of ornamental trees and shrubs, including citrus, gardenia, camellia, rhododendron, oak, Ficus, and others. Females deposit eggs on the foliage, preferring very young emerging leaves and normally ovipositing along the leaf margins.

The adult has a yellowish tint to it, differing from the pure white of most other whiteflies. It has a powdery look, holds it wings slightly roof-like over the abdomen at rest, and resembles a tiny moth. The early stages resemble tiny scale insects, being oval, flattened, and without the white waxy surface of many other whitefly nymphs and pupae. It is nearly transparent, with 2 dark spots at the anterior end and a very thin, transparent wax fringe around the sides of the body.