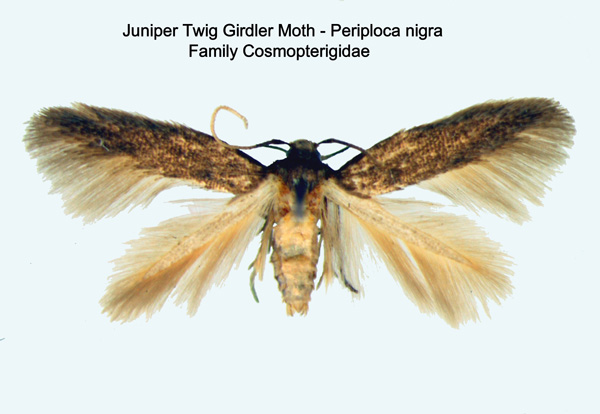 This is a native species in western North America.

This moth can be a pest of ornamental juniper shrubs in the western U.S. The larva feeds under the thin bark of the plant, causing girdling and the death of that branch of the juniper. This rarely kills entire plants, but heavy infestations lead to stands of the juniper with many dead branches, reducing the overall aesthetic appearance of the plants.

The symptoms on the plants are a good indication of the presence of this pest. The adult moth is rarely seen, but is small and a shiny brown-black color overall.

Physically removing the dead branches will be an effective non-chemical control. A residual insecticide can be applied to the junipers to kill adult moths and the larva as they hatch from the eggs. The timing on this is important, and may be as early as March in southern areas and early June in cooler, more northern areas.