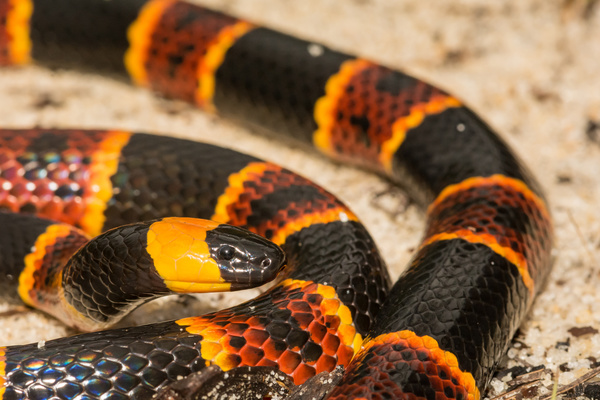 This is a native snake in the southern U.S. and the only species north of Mexico. Several dozen other species in the same genus occur throughout Central and South America, and their color patterns will differ.

Eastern coral snakes are found in the southeast states from Texas to Florida and north to North Carolina. They have the most potent venom of all venomous North American snakes. This is compounded by the snake’s behavior of biting and holding on, potentially releasing more venom into a victim. Other venomous snakes prefer to strike and then let go and back away. Coral snake bites are very uncommon due to the reclusive behavior of the snakes and their preference to avoid urban areas. They also have short fangs that cannot penetrate leather boots, reducing the times the bite reaches the skin. Coral snake antivenin exists, but due to the lack of need its production has stopped in the U.S., leading to the potential for more serious reactions when someone is bitten by this snake.

Coral snakes will generally be easy to identify with their alternating bands of black, red, and yellow, although the exact pattern is important as it distinguishes the venomous coral snakes from the non-venomous snakes such as some king snakes, milk snake, shovelnose snake, and others. Coral snakes in North America have red bands touching yellow bands whereas the non-venomous lookalikes do not, giving rise to rhymes such as “red on yellow, kill a fellow” to remind us of this important order of the colored bands. They are normally small snakes, averaging no more than 3 feet in length but potentially growing to 5 feet.