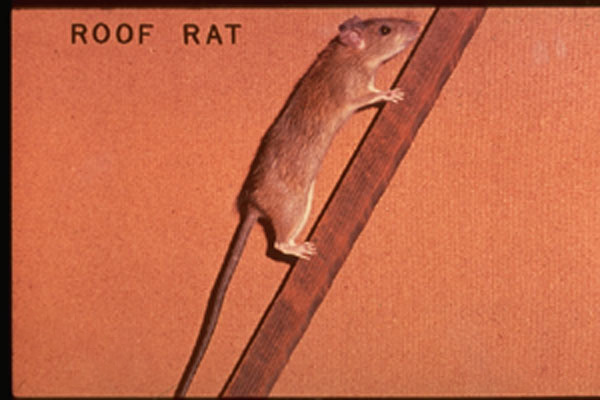 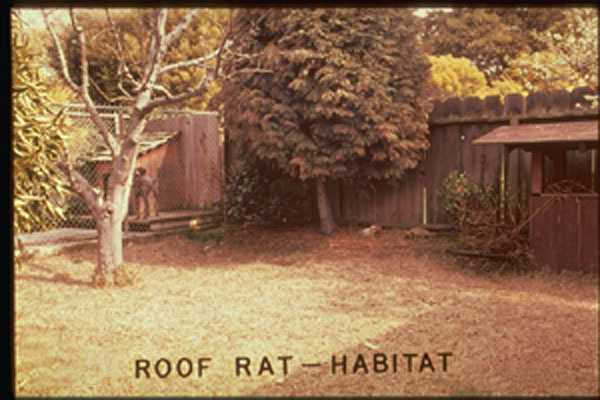 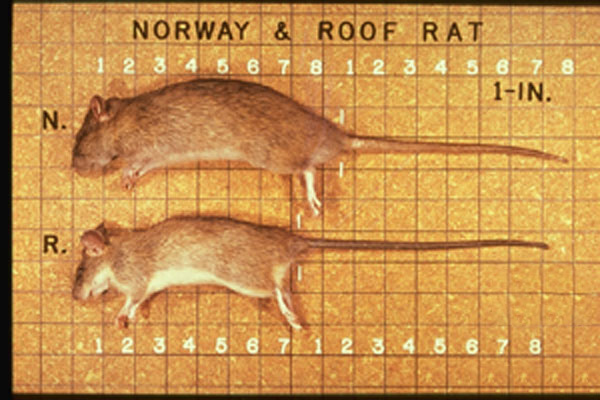 The Roof Rat is an “arboreal” animal, preferring to live above ground level in trees, although it has adapted well to upper areas of structures as well, living in attics and traveling by means of wires and cables attached to homes. It is nocturnal and secretive, staying out of view within the foliage provided in landscaped environments, and feeding heavily on the fruits, nuts, vegetables, or garden snails found there. Like the Norway Rat is also is shy about new objects in its familiar environment, and may avoid control measures such as traps or bait stations. A normal life expectancy for them is one year or less, ranging from 5 to 18 months. The gestation period of the female is 22 days, litters average 8 to 9 pups, and she may have 3 to 4 litters in her one year, being somewhat less prolific than the Norway Rat. Peaks in breeding occur in the spring and the fall. Problems from Roof Rats include the potential for disease, such as plague, spread by their fleas. They are extremely destructive to stored food products in structures, crops in residential areas, and cause tremendous damage due to their gnawing on structural members, pipes, and electrical wires.

The Roof Rat is a smaller, slimmer rat than the Norway Rat, and cannot compete with the Norway when space is limited. Its tail is noticeably longer than its body length, the best ID characteristic in the field. In relation to its head it has a pointed nose, large eyes, and large ears. Its color is dark gray to black with a lighter grayish belly, and it ranges to a lighter brown depending on which “subspecies” is present.

Exclusion from structures is of high importance in preventing entry and damage from this rat. They can enter through any opening wider than one half inch, swim well, and can climb any rough surface, along wires and cables, and can jump vertically about 3 feet. Glue trays work very well for Roof Rats, along with snap traps placed in runways and bait stations using various formulations. Like the other domestic rodents they prefer to remain against vertical surfaces, in contact with their “guard hairs” on their body, and control measures should be placed against these pathways.