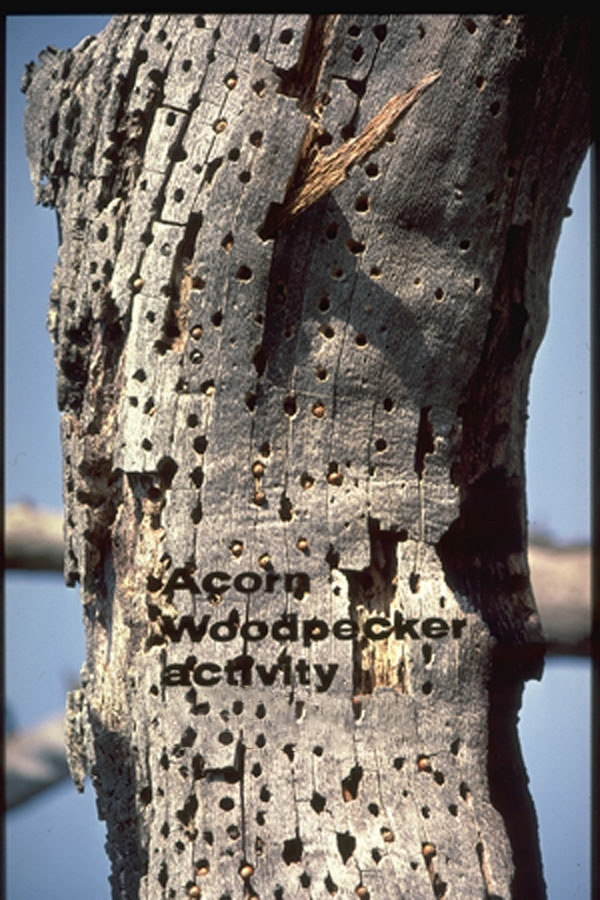 This is another of the species that may cause drilling damage to structures. Their diet consists of a high percentage of insects in spring and early summer and a high percentage of nuts and other plant materials in the fall and winter. It is an accomplished hunter and catches many insects in flight or on the ground. It will even feed on small rodents and bird eggs. It is one of the few woodpeckers that caches its food, storing large numbers of acorns or nuts inside cavities and covering it up with grasses and twigs. Mating occurs in the spring and a clutch of 4-7 eggs is laid. Nests are typically within cavities in wood, and the same nest site may be used year after year. Hatchlings are mature enough to leave the nest in about 1 month. Damage to structures is possible and usually occurs during mating season in the spring. Holes may be drilled into wood to store acorns or to create a cavity for nesting. Further annoyance comes from “drumming”, a woodpecker’s method for communication, and is most common in the spring when associated with mating activities. Drumming is done by a rapid series of pecks on a surface that will create a loud sound, and metal surfaces such as rain gutters, chimney caps, metal flashing and others are often chosen for their loud resonance. Utility poles are often selected as sites for storing food or for nesting and serious damage can occur over time.

The red-headed woodpecker is aptly named and unmistakable. It is the only North American woodpecker with a completely and solid red head and neck. The long beak is silvery-white in contrast, the body feathers are bright white, the tail feathers solid black, and the wing feathers are dark black with a broad white band across the middle. Both males and females are colored in this manner.

Woodpeckers are classified as migratory, non-game animals by the U.S. Fish and Wildlife Service and often further protected under state or provincial laws. They cannot be harmed without specific permission from regulatory and wildlife agencies and only then with good reason for doing so. For long term management exclusion is the preferred option, installing physical materials that prevent the birds from accessing favored sites for nesting or drumming. This includes the use of bird netting under the eaves of structures or sloped plastic or metal barriers that prevent the birds from landing and gripping the side of the structure. The birds prefer to drill in wood that is not painted or covered with a finish, and surface coatings may help to discourage them. Various kinds of fright devices may have a temporary effect to scare birds away, but the birds typically become accustomed to the devices and ignore them. Repellents, according to University resources, will be generally ineffective. Sticky repellents can be applied to valuable trees or to wood surfaces if they are not going to cause any other negative effects.