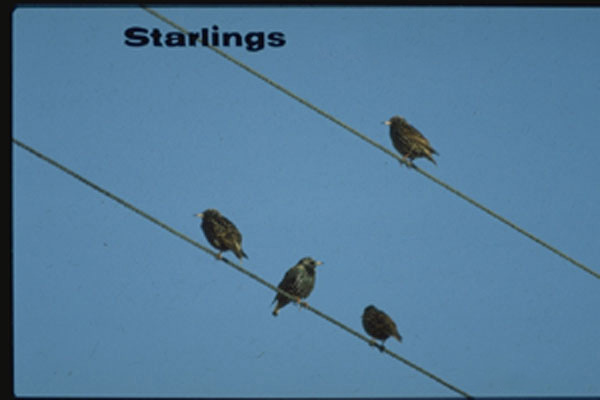 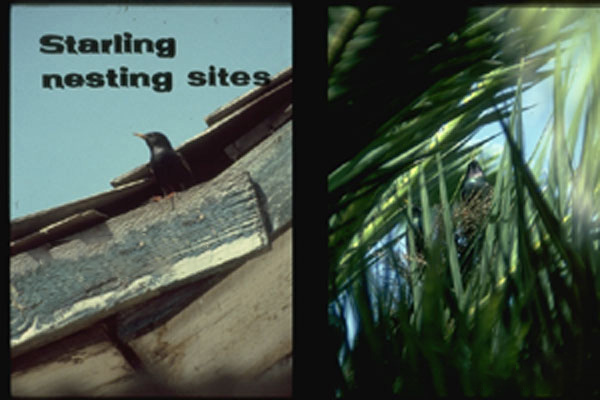 Starlings are opportunistic in their feeding and nesting needs, and easily adapt to living in close association with humans and feeding on our agricultural crops. They will feed on insects, grains, fruits, seeds, and will gather in large flocks around livestock areas. Their consumption of insects is outweighed by their consumption of desirable grain crops, and their aesthetic value is overwhelmed by their huge production of feces and their messy nests in urban areas. Flocks can number several thousand birds, with as many as 5 million birds estimated in one general area in California during the summer. When they roost in trees in urban areas the fecal accumulations below may be a health concern, with the familiar pathogens that may cause Salmonella poisoning, histoplasmosis, and other bird-borne diseases. Starlings are aggressive birds which may out-compete native bird species, dominating food and nest resources. Flocks from far northern regions migrate south and over-winter in more mild climates. Nesting begins in early spring, with nests placed in cavities of any kind, including on structures. Nests may be used again, leading to large accumulations of feces. An average of 4 to 6 eggs is laid, hatching in under 2 weeks, and fledglings are able to fly at about 3 weeks of age.

These are medium sized birds, black with a purple and green iridescence on their feathers. The tips of the feathers are cream-colored, giving the birds an overall speckled appearance. The elongated beak is brown in the winter and yellow in the summer, and legs are deep pink to reddish.

Starlings are classified as non-game birds, with no federal protection, and under federal regulations may be killed or controlled at any time in any manner. Local ordinances may offer protection even to this species, and must be understood before undertaking a control program. For control around urban areas exclusion programs offer the best choice for preventing nesting or roosting on structures.