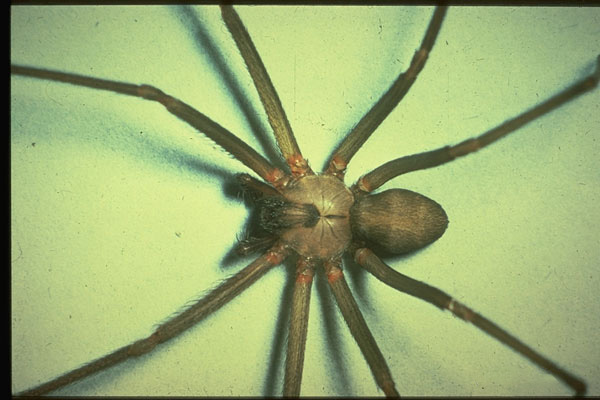 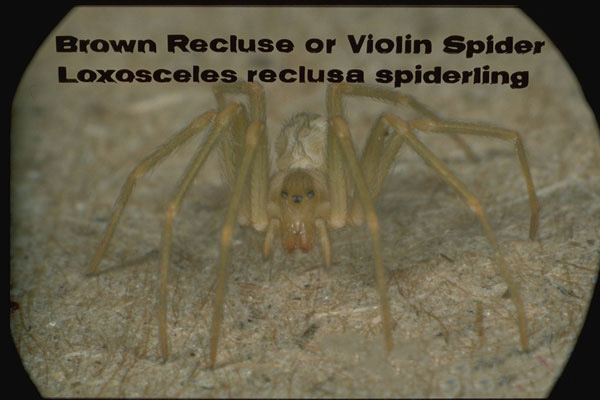 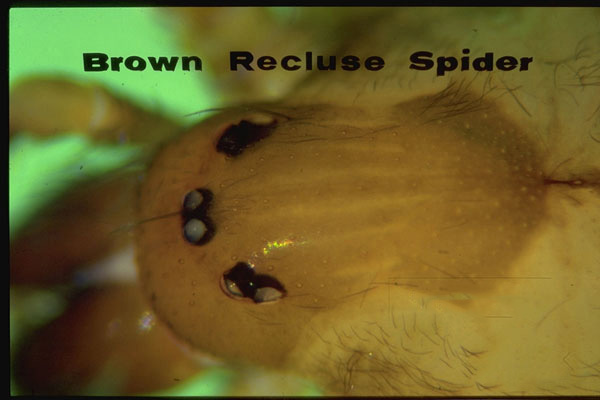 There are 11 species of Loxosceles that are native to the United States, and at least one imported species that is found in the southwest. The Brown Recluse, L. reclusa, has the widest range, from a small area of western Florida to Texas and north to Iowa. It has been found sporadically as a transient in other states. The other 10 native species are found in the southwest from Texas to California.

The Brown Recluse, Loxosceles reclusa, has a reputation that far exceeds reality. It is a hunting spider that uses it web only for lining its retreat and for covering its eggs. It is very capable of biting humans, and the venom is a cyto-toxic venom which causes tissue death at the site of the bite, possibly leading to a large, infected, and lingering wound. However, experts believe that most skin infections blamed on this spider’s bite are actually bacterial infections, particularly in states with very high reported bites but very low confirmed presence of the spider. The Brown Recluse lives commonly in structures, hiding with clothing, behind furnishings, or in attics and wall voids. Young spiders take about one year to mature and the adults live about one year more. They prefer to remain in areas of low activity and are not aggressive, biting only when provoked to do so by becoming trapped and threatened with harm.

These are light to dark brown spiders with very long legs and short hairs covering the legs and body segments. On the top of the cephalothorax there usually will be a darker pattern that strongly resembles a violin, giving this genus its common names of “violin” or “fiddleback”. However, many other spiders also have this vague pattern, and positive identification cannot be made based only on this character. The eyes of Loxosceles are very distinctive for the genus. There are 6 eyes arranged as 3 pairs in an arc across the front of the cephalothorax. No other spiders have this eye arrangement, and it can be seen easily with low magnification.

General cleanup of unnecessary debris outside will reduce harborage sites, and cleanup of clutter in garages or storage areas will reduce the numbers of spiders living on the interior. If invading spiders become a problem they can be prevented with an application of a residual pyrethroid insecticide around the building exterior and in likely pathways along walls on the inside. The use of glue traps can confirm the presence of the spiders, placed in attics or along wall-floor junctions. Dust formulations can be injected into walls or other voids the spiders may inhabit. Since structures can be re-infested from surrounding areas the habitat of this spider should be pushed as far away from the structure as possible. Heavy vegetation cover on the ground should be kept away from the structure, and all debris and materials on the soil that do not have to be there should be eliminated. Trees and shrubs that grow near the structure should be physically separated by pruning, and all cracks or other openings to the structure that can be repaired should be permanently sealed.