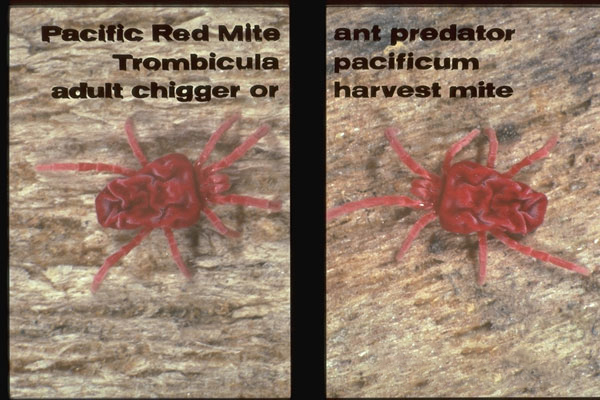 Several species of chiggers are native to North America, most commonly encountered in the southern states of the U.S. and commonly throughout Latin America.

The adults of these mites are free-living predatory mites, feeding on other mites and possibly tiny insects. It is the larval stage, or first instar, which is called the chigger, and it is a parasite on humans and many animals, including other mammals, birds, reptiles and amphibians. On humans they tend to bite the skin around the ankles or belt area, where clothing fits tightly against the skin. The adult mites overwinter in the soil, producing their eggs with the warmth of spring. They then die, and the new chigger stages emerge from the eggs to seek their food sources. They are rapid crawlers, living in tall grass and other vegetation and climbing onto people who walk through those areas. The chigger does not burrow into the skin, but feeds for only a day or so by inserting its mouthparts, drawing out blood or other fluids. The saliva causes the severe itching reaction.

Chiggers are bright red mites. The adults are very fast crawlers with long legs and a velvety appearance to their body. The chigger stage looks very much the same except for its much smaller size. In this larval, or chigger, stage it has only 3 pairs of legs, and these are very stout and covered with spiny hairs, the legs being much longer than the body length.

Reduction of habitat for chiggers is important in urban areas, by keeping grassy environs mowed below 6 inches in height. Vegetation should be properly trimmed and moisture should be controlled where possible. People who walk through potentially infested areas should wear repellent and tuck their pants into their socks to inhibit the chiggers from getting under the pants and onto the skin. Applications of a registered insecticide to limited, high traffic areas may be helpful.