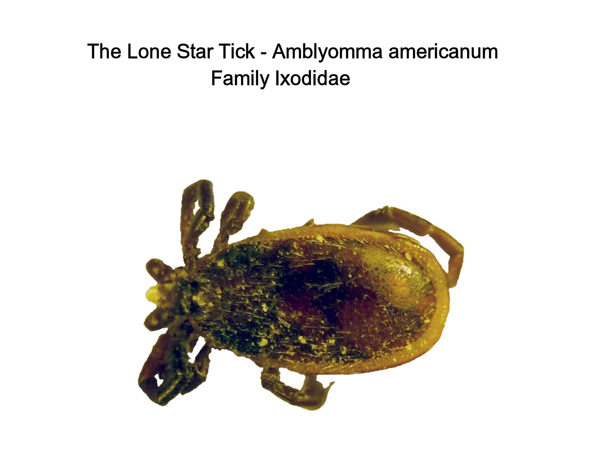 This tick is a native in eastern North America and is found from Texas north to Iowa and east along the Atlantic coast as far north as Maine.

This tick is a potential vector of Ehrlichiosis and Tularemia. It seems to be found most often in dense forest areas where thick underbrush is present. The bite of the tick often causes a large circular rash similar to that of Lyme Disease, but the Lone Star Tick to date has not been shown to be a vector of Lyme. It feeds readily upon many animals, including household pets and humans, and it can be a relentless tick when searching for a blood host. The preferred host appears to be livestock such as cattle. It is a 3-host tick, with the larva and nymph stages dropping off the host animal once engorged and seeking a secluded place to digest the meal and molt to the next stage. Development from egg to adult takes at least 2 years and as much as 3 years.

The adult ticks are fairly large, with unfed females nearly 1/3 inch long. The female is unique and unmistakable due to a large white spot on the top of the body. The male does not have this spot and is an overall shiny reddish brown color.