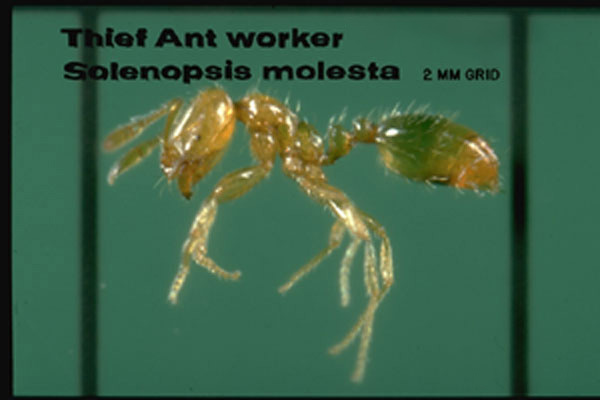 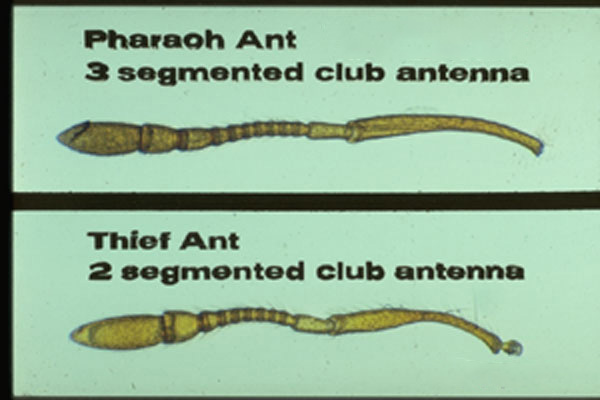 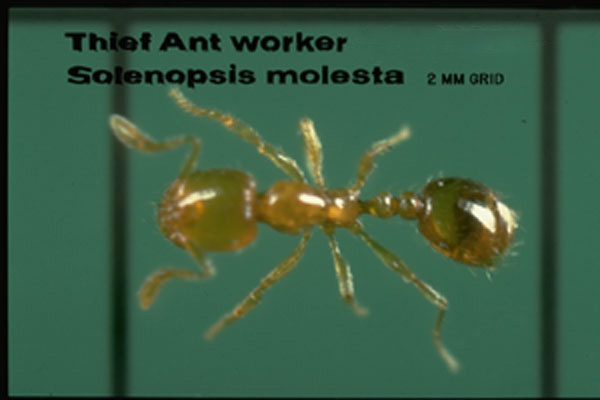 Not mentioned in literature, but this species is found throughout the United States as a common, indoor ant pest.

This is a double-node ant, but is far too small to sting. Its name is derived due to its ability to enter the nests of other ants and steal and feed on the larvae of these other species. The small size of the Thief Ant allows it to move undetected. They feed on carbohydrate such as honeydew or sugary foods, but are particularly fond of oils and meat, even being found feeding on dead carcasses. A colony may have only a few hundred workers but many queens, and nests both indoors and outdoors can be located in very small cavities, under debris or objects on the soil, behind wall paneling or loose floor molding, and within wall voids or cabinets.

This tiny ant is less than 1.5 mm long and is such a light orange color that it may be difficult to spot in an inspection. It has no spines on the thorax and has antennae composed of 10 segments. It is easily confused with the Pharaoh Ant in size and color, but may be distinguished by the club at the end of the antenna, which is composed of only 2 enlarged segments. On the Pharaoh Ant this club is made up of 3 enlarged segments, and at least 30X magnification may be necessary to see this character with certainty.

Control of these ants includes correction of the attractions that drew them to a property, including harborage sites, food sources, and moisture conditions. Elimination of insects that provide protein or honeydew sources reduces ant foraging in an area, very important for this species, and cleanup of unnecessary debris or objects on the soil that provide harborage eliminates nesting. Ant bait products in liquid or gel formulations can be highly effective, and protein formulations may be preferred. Location of the nest sites is important, and when found can be treated directly with a residual dust insecticide.