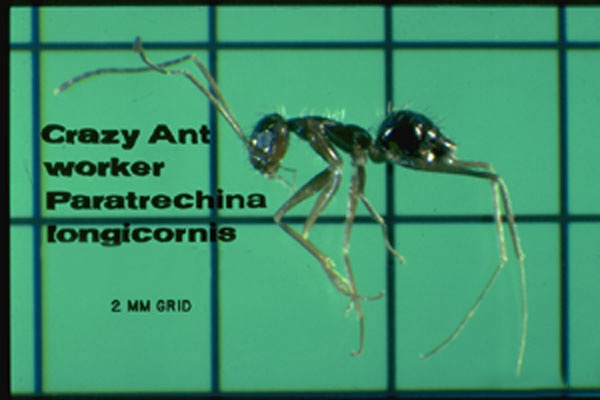 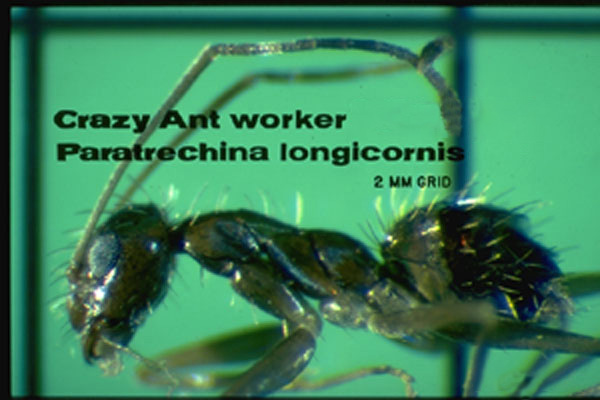 This is a single-node ant whose common name comes from their habit of running around erratically, with no apparent purpose. Their extremely long legs and antennae tend to accentuate this behavior. Nests may be established in a wide variety of situations, from wet to dry habitats, in the soil under other objects, in tree holes, under mulch, in potted plant soils, or in other odd cavities they find. Within structures they nest in wall voids or under objects that are not moved for a period of time. Their foods range from proteins to sugars, and they will tend aphids for honeydew. They also are excellent predators, feeding on the larvae or adults of many other insects, including fleas, flies, and fire ant swarmers. The colony of the Crazy Ant may have numerous queens, and new colonies are often established by budding. Colonies commonly contain only 1000 to 2000 workers, but may have up to 40 queens. This is a monomorphic species where all the workers are the same size.

Control of most ants includes correction of the attractions that drew them to a property, including harborage sites, food sources, and moisture conditions. Elimination of insects that provide protein or honeydew sources reduces ant foraging in an area, and cleanup of unnecessary debris or objects on the soil that provide harborage eliminates nesting. Application of residual dust insecticides into structural voids and application of a residual insecticide spray along foundation perimeters will help to kill trailing ants. Ant bait products in granular, liquid, or gel formulations can be highly effective if the ants accept the bait. If the ant colony can be found it can be treated directly with a dust or liquid insecticide.