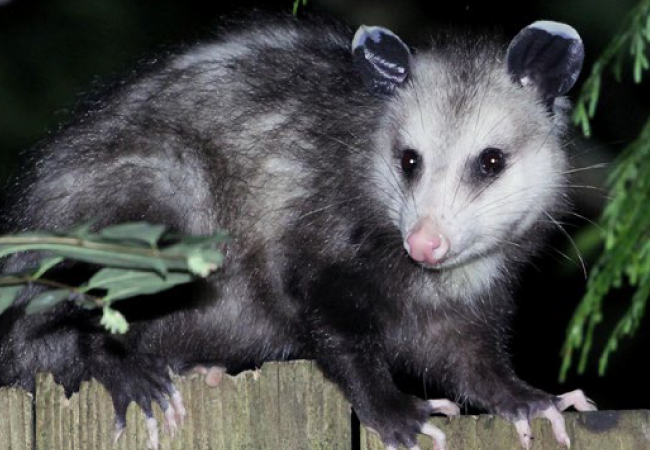 The Virginia opossum is the only marsupial (pouched mammal) native to the United States. It is found along the west coast and east of the Rocky Mountains. Even though it doesn’t survive well in extreme cold, its range has extended into parts of southern Canada, most likely due to the availability of shelter from man-made structures. Although the words “opossum” and “possum” are used interchangeably, opossums are found in the Americas while possums refer to unrelated marsupials native to Australia.

Virginia opossums have a prehensile (grasping) tail and opposable thumbs on their hind feet, features that allow them to climb very well. They are active at night and will hunt small animals, eat plants and fruit, or scavenge pet food and garbage. Instead of creating their own dens, they take advantage of abandoned burrows or voids in trees or buildings. Opossums should not be allowed onto properties because they are commonly infested with cat fleas and have been associated with murine typhus. They don’t usually vector rabies.

A live trap is the best way to remove an opossum from a property. Bait a trap with fruit or canned fish or pet food and place it where the opossum is denning or near other areas of activity. Since opossums are nocturnal, traps should be set at night and checked the next morning.

Check out our Wildlife Management - The Mammals ProTraining course:

Mammals that enter our landscapes may also enter our structures and pose some serious health risks. Management of these is the focus of this course.