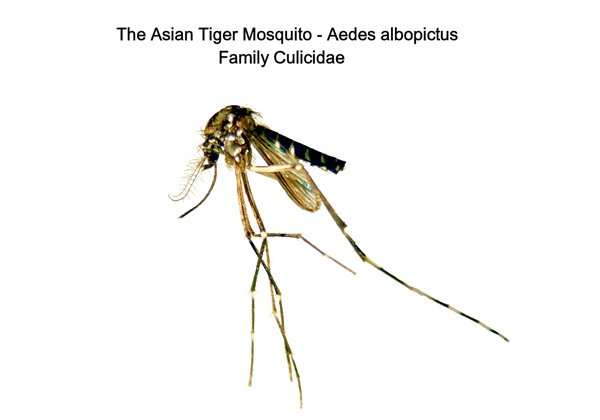 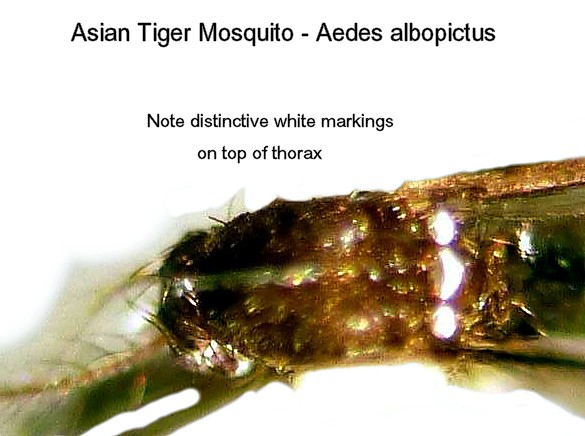 This species is native to Asia but was introduced into Hawaii in the late 1900’s and was found in the continental U.S. in Texas in 1985. It now is found in at least 26 states and as far north as Minnesota and Pennsylvania, south to Florida, and west to West Texas. It also is now found in South America, Mexico, and the Caribbean, in Africa and Europe, and in Australia and several major islands of the South Pacific. It’s spread has been tied in some cases to the movement of automobile tires and the larvae living in water in these tires.

This serious species of mosquito has been described as the “perfect” vector of mosquito-borne diseases and is known to be able to spread dengue and encephalitis and is capable of vectoring up to 30 different pathogens. It is considered to be a minor threat with respect to Dengue and in fact displaces Aedes aegypti, which is a much more competent vector of this disease. Its expansion in the U.S. coincides with a noticeable decline in the abundance of Aedes aegypti, the “yellow fever mosquito”, due to possible resource competition, introduction of mosquito parasites, and possibly reduced fitness in A. aegypti due to inter-species mating. It is a daytime feeder and a very aggressive biter. Females deposit eggs on the sides of containers that will later hold water, the eggs hatching once submerged when rainwater fills that cavity, such as tires, tree holes, and miscellaneous small containers in refuse areas. In cold climates the eggs overwinter and in warm climates the mosquitoes are active year round.

Like other Aedes mosquitoes it is black with white patches, and in particular has a shiny caste to the black scales and silvery white scales on the proboscis and on each segment of the legs, as well as patches of silvery white on the abdomen and a white stripe down the center of the thorax. The abdomen narrows to a point at the end.

Very important is elimination of breeding resources in landscape, such as discarded containers on the ground, plant containers, rain gutters, bird baths, etc. Larvae feed on organic matter in contaminated water and do not survive in clean water. Discarded tires are a major breeding site, and these should be removed and recycled or drained of water, including drilling holes in old tires to prevent capture of water. Sites that cannot be drained may be filled or treated with larvicides. The wearing of long sleeves and repellent when active outdoors are important measures to prevent bites.