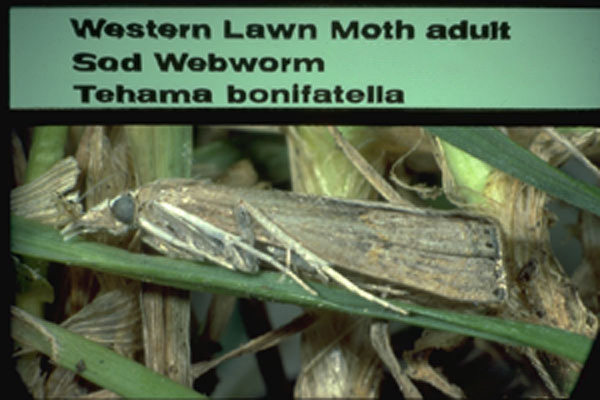 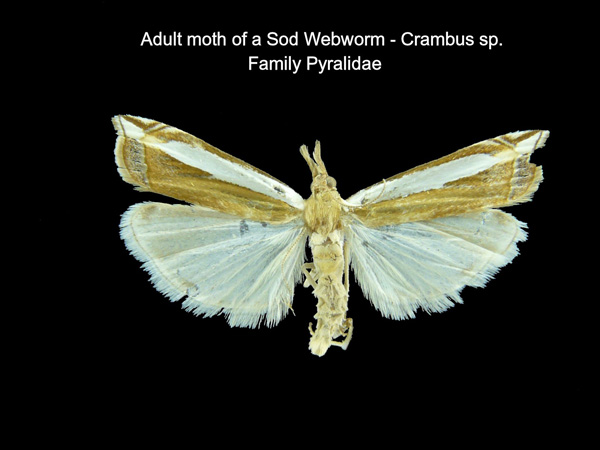 These are native species in North America and various species may be found in every state and in Canada and Mexico.

There are nearly two dozen different species of small moths that feed on grasses and which are referred to as “sod webworms”. They are found in at least 10 different genera, but the genus Crambus comprises the majority of these moths and will be used as the example here. Female moths haphazardly drop their eggs while in flight, particularly when seen fluttering over an area. Some species may land and rest in the turf to deposit their eggs, and several hundred eggs per female will be common. Larvae immediately create burrows from bits of leaves and soil held together with webbing, and they tend to remain within this tube during the daytime and often while feeding. Most species feed on the crown and blades above the crown but some will feed on the roots of turf as well. Development to the adult moth may require only a few weeks.

Most species of Crambus are very similar in appearance. The adult moths have a wingspan of about ¾ inch or slightly longer with very narrow forewings and widely rounded hind wings. They most often have forewings that are tan to brown with a very broad silvery white stripe running from the base to nearly the outer end. There may also be other white dashes and brown lines. The hind wing is often white but sometimes brown. There also will be an elongated “snout” protruding from the front, composed of the two enlarged palpi of the mouthparts. The larvae vary in color from green to brown but usually have a row of circular black spots along the top of the body.

Removal of unnecessary thatch will help to remove larvae as well as plant materials they need for their tubes. Contact insecticides applied to the turf will kill the larvae as they feed.