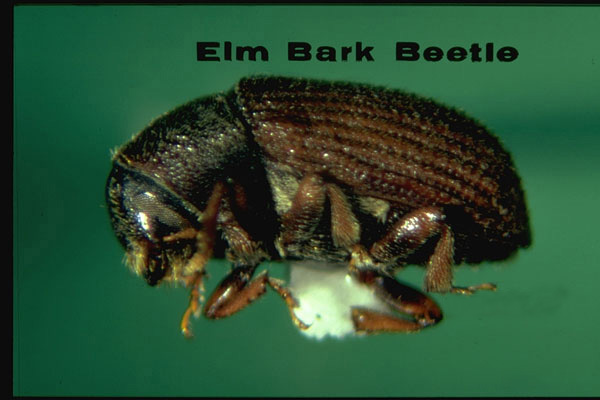 This native beetle attacks elm trees, in particular American, Siberian, and Chinese elms. Adult beetles overwinter in chambers at the base of elm trees, emerging in the spring to fly to dying or recently killed branches of elm trees where the female burrows under the bark, bores a gallery in that area, and deposits eggs along both sides of this channel. The larvae then burrow outward from this egg channel to feed in the cambium of the tree. New adults emerge from these trees carrying the Dutch Elm Disease fungus on them, Ophiostoma ulmi, and fly to new, healthy trees to feed on the bark, creating small holes and infecting these new trees. The fungus then moves through the vascular system of the tree, resulting in sudden wilting of the foliage and death of the tree. There is a single generation of the beetles each year.

Infected trees will have numerous exit holes in the bark, each about 1 mm in diameter and often with frass on the bark or ground below these holes. Infected sapwood will have brown streaking. The adult beetles are 2 to 3.5 mm long and dark brown to almost black with reddish-orange legs. There is a covering of short, fine hairs over their surface and the wing covers and thorax have a roughened look due to the rows of deep punctures running front to back. Typical of the bark beetles the head protrudes downward from the prothorax and is hidden from view from above. The antennae are typical of bark beetles with several very small and short segments and a much larger, rounded terminal club.