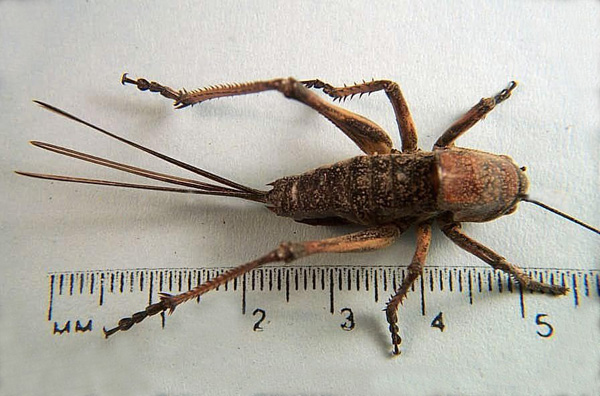 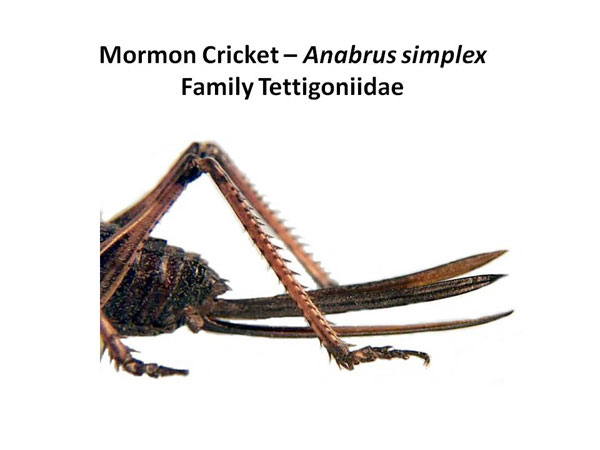 Despite being called a cricket this destructive insect is actually a form of a katydid. It is native throughout western North America in sagebrush areas, rangelands, and grasslands, and is subject to population outbreaks that cause result in serious agricultural losses. Up to 100 large adults per square meter may be seen. Adults are wingless and cannot fly, but during swarming periods may travel up to 1.5 miles per day, crossing highways in such numbers that they become a hazard to vehicles. Most eggs in the soil will hatch when soil temperatures reach 40 degrees Fahrenheit, and nymphs pass through 7 instars to become adults in 60-90 days. Mating occurs and females push their ovipositor into the soil to deposit up to 100 eggs.

Adults are very large insects, up to nearly 2 inches in body length with a very long ovipositor on females. They are dark brown to nearly black, wingless, and with the thorax forming a noticeable shield over the top-front of the abdomen. Hind legs are extremely long and developed for jumping.

Most control is successful using granular insect baits. Around landscaped areas residual sprays can also reduce the numbers. It is interesting that some local communities believe they have achieved success in repelling the crickets from their areas using loud and raucous music, directed at the approaching waves of crickets.