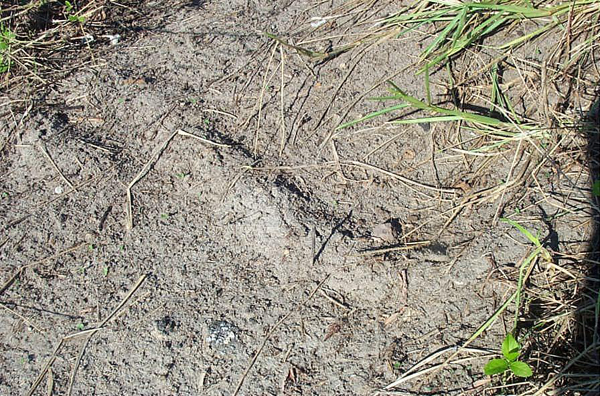 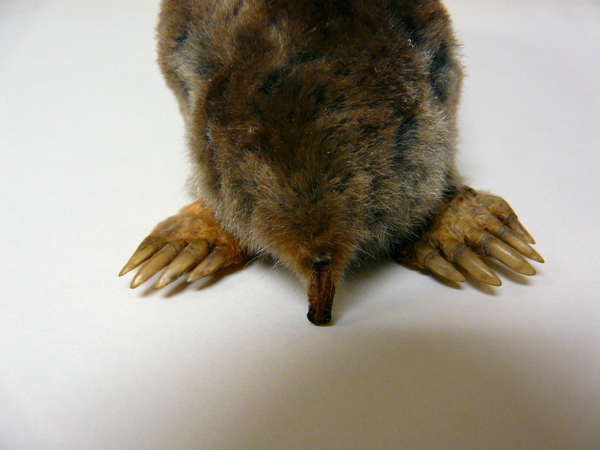 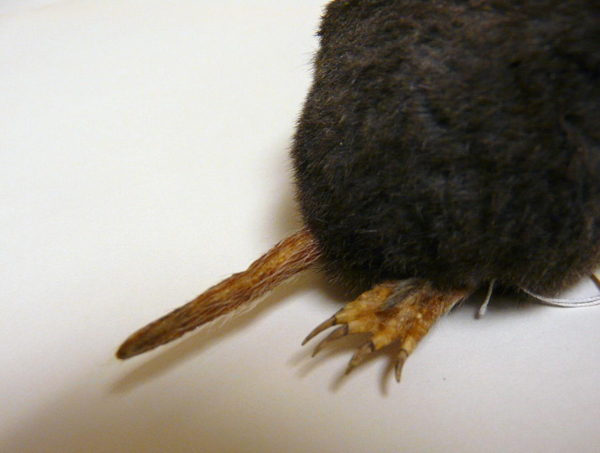 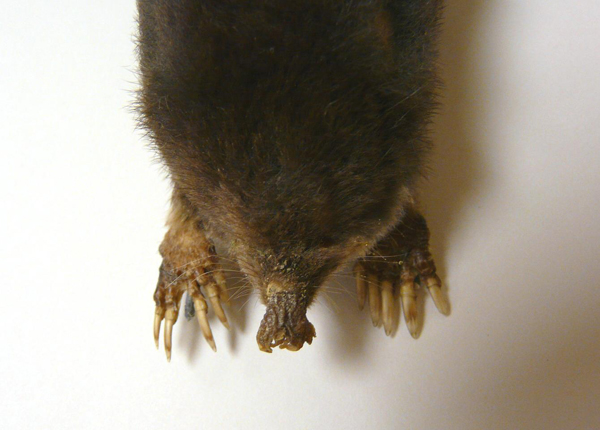 North America has at least 7 species of these insect feeders, including the odd Star-nosed mole of eastern Canada and Northeastern U.S. and the large Townsend’s mole of the West Coast states and British Columbia. Depending on their range their diets may consist primarily of grubs or earthworms as well as other insects and a small amount of plant material. Their huge front feet with long claws enable them to virtually “swim” through softer soils as they forage for food items, and they can run equally well forward or backward through their tunnels. They live an entirely subterranean existence, leaving their burrows only for mating or when young leave their mothers. A main den is present deep in the ground, often near the roots of larger trees or shrubs, with permanent tunnels moving from the den to feeding areas. Surface burrows are for feeding only but may be used repeatedly. These are solitary animals that remain active throughout the year. A single litter of 3 to 5 young are born in very early spring.

Moles of most species have a narrowed, hairless, pointed snout that is highly sensitive to touch and to the odors of food. The Star-nosed mole’s snout is very different, consisting of 22 thin tentacles at the end. This species is semi-aquatic, spending much of its time foraging for aquatic insects and small fish and crustaceans, and the expanded tentacles of the snout are extremely sensitive to food odors in the water. Moles have very small eyes and no external ears, as the eyes and ear openings are concealed within the dense fur. The tail is very short and thin and hairless. The front feet of most species are widely expanded and have long, strong claws for digging. The distinctive presence of moles is by the surface burrows that are meandering, raised sections of soil. Occasionally a large mound of soil will appear as the moles clear their tunnels, but these differ from the mounds of gophers by the lack of the “horseshoe” shape and lack of the soil plug.

Repellents exist for moles but are generally based on castor oil and need to end up in the burrows to have any chance to be effective. Many university fact sheets downplay the effectiveness of repellents for moles. Trapping is highly effective but time consuming and thus expensive for the homeowner, as traps work best when placed into deep, permanent runways. Baiting using a worm-like mole bait has proven to be highly effective. For small garden areas a physical barrier can be installed using sheet metal or hardware cloth, buried at least 12 inches in the soil and bent outward 90 degrees.