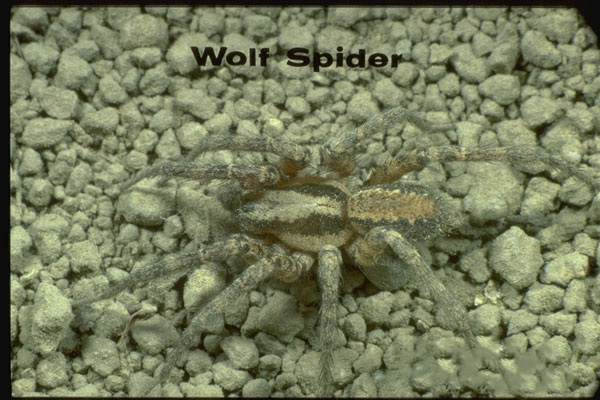 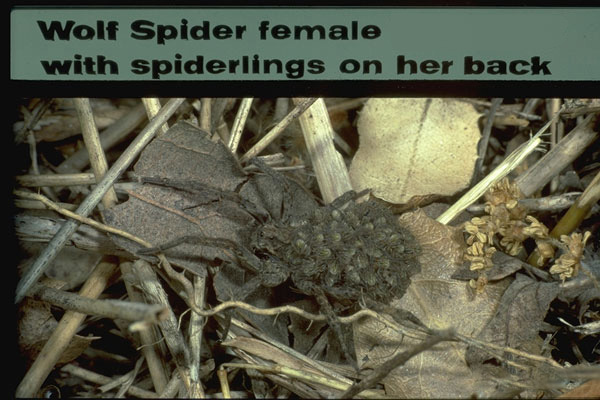 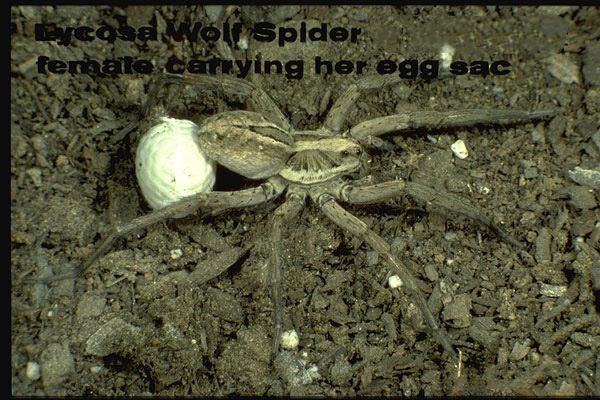 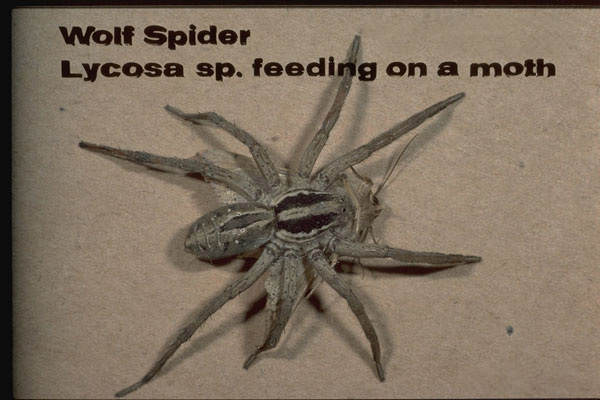 Wolf spiders are hunters, and use their silk only for lining a nest and for covering their eggs. The females create the tough egg sac and then carry it attached to the tip of the abdomen. Once the eggs hatch the mother then cuts a slit in the sac to allow her young to emerge, and they then climb onto her abdomen to be carried around for up to 2 weeks. Some species of wolf spiders may have leg spans of 4 inches or more and they are very mobile, very fast, and very aggressive when threatened. They are capable of biting humans but the venom is not considered dangerous, but their aggressive behavior makes wolf spiders some of the most feared by people. Smaller species may even “run” across the water of a swimming pool, suspended on the surface tension of the water. Retreats for the spiders are holes in the soil, under debris on the ground or within wood piles. They commonly enter structures and can be found running across floors or walls as they search for food.

Wolf spiders vary in size from small species with only ½ inch leg spans to large ones whose legs may stretch out 5 inches. In general they are long legged and covered with short hairs, gray to brown to dark brown in color, and with several darker stripes running longitudinally on the cephalothorax. These body region is somewhat pear-shaped, with the front much narrower than the back and with the front, when viewed from the side, sitting higher than the back. However, the eyes are distinctive, with 8 ocelli arranged in the following manner. The “face” area is usually perpendicular, and the hind pair of ocelli sit at the top of the face, a very large pair of ocelli sit facing directly forward, and 4 smaller ocelli are in an arc below this enlarged pair.

There is little reason to kill these beneficial spiders, and those found inside should be captured alive and removed to the outside, where their activity as predators serves a benefit to the landscape. General cleanup of unnecessary debris outside will reduce harborage sites, and cleanup of clutter in garages or storage areas will reduce the numbers of spiders living on the interior. If invading spiders become a problem they can be prevented with an application of a residual pyrethroid insecticide around the building exterior and in likely pathways along walls on the inside.