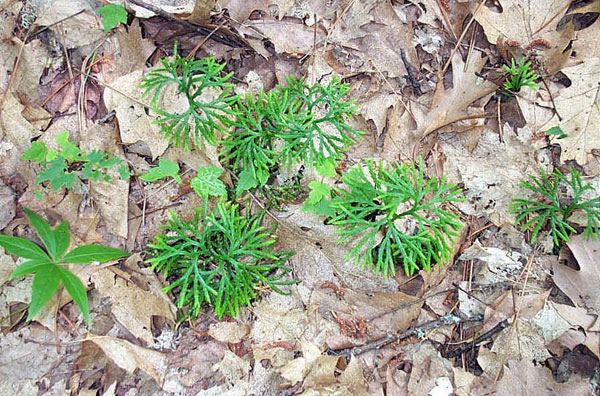 Native to North America, where it is found from Alaska throughout Canada and throughout the northern third of the United States from Oregon to the east coast.

A perennial forest plant that resembles ferns. Reproduction is from spores. Plants can be toxic, as they contain lycopodine and clavatine, potentially toxic to the nervous system. Plants prefer deep shade and moist, loose, well-drained soils, and may form dense patches under forest canopy.

Mature plants grow in an umbrella-like habit to over 1 foot in height, with an erect stem giving rise to laterally spreading foliage. Numerous stems may arise from the main stalk, and the foliage is narrow, thickened, and conifer-like with many branches. It is shiny and dark green. Flower heads are sporophylls that are produced from the ends of the branches, rising several inches above the leaves and resembling small cones that are 1 or 2 inches long and erect.

Not a plant needing control.