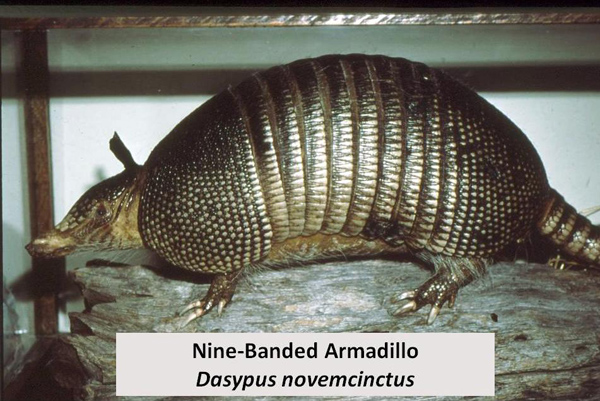 This animal is native to South America. Millions of years ago when the narrow link formed between Panama and South America it enabled land animals to move northward. It is interesting that it was not until the late 1800’s that the armadillo finally crossed into the United States and it now is expanding its range further. About the same time that it entered Texas on its own it was introduced by humans into Florida. It now occurs as far north as southern Illinois, southern Nebraska, and southern Indiana, and along the east coast to South Carolina and west to New Mexico.

Armadillos may be the most peculiar mammals in North America. They belong to a family of many different species, but only with 9 species in the genus Dasypus. The nine-banded armadillo is the only species in North America. They are primarily meat eaters, foraging in the soil for earthworms, grubs, ants, termites, and other insects, but also may feed on carrion, small lizards and snakes, and on fungi. Even with its short legs and stocky build it is capable of jumping 4 feet into the air when frightened. Their pest status is due to the damage they cause to turf and landscapes as they burrow into the soil in search of food, as well as the hazard they pose to drivers who hit them on the road. It also is now well established that this animal harbors the virus that causes human leprosy, and it can be transmitted to people who handle the animals with bare hands or open cuts or who eat the meat improperly cooked. Mating takes place in mid-summer in northern regions and mid-winter in southern regions. A single egg is fertilized, but this splits into 4 embryos and results in the birth of 4 identical young. The armadillo can live for 12 to 15 years and a single female may produce up to 56 offspring in her life.

This species is one of the largest armadillos, with a head and body length of nearly 2 feet and a tail adding another 18 inches or so. They cannot be mistaken for any other North American animal due to the armor plating over their body, including the 9 or 10 “bands” (rings) around the middle of the body that provide flexibility.

Where it is legal armadillos may be shot and killed, but attention must be given to state wildlife laws to ensure necessary licenses or permits are taken out. For landscapes it may be most effective to exclude the animals with fencing or discourage them by eliminating the insects they would feed on. One commercial armadillo repellent is available that may provide some relief. Trapping is also effective, but the disposal of the trapped animal needs to be considered and relocating off site may be illegal in many states.