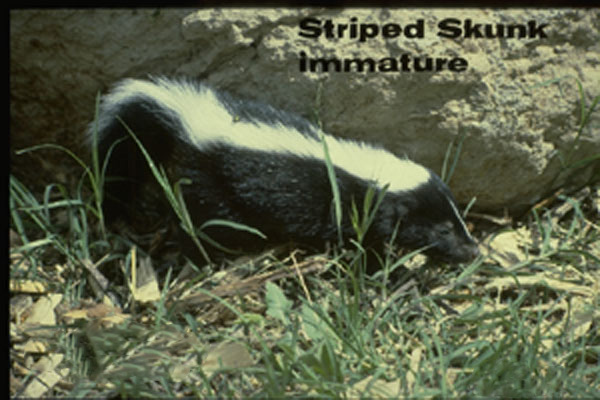 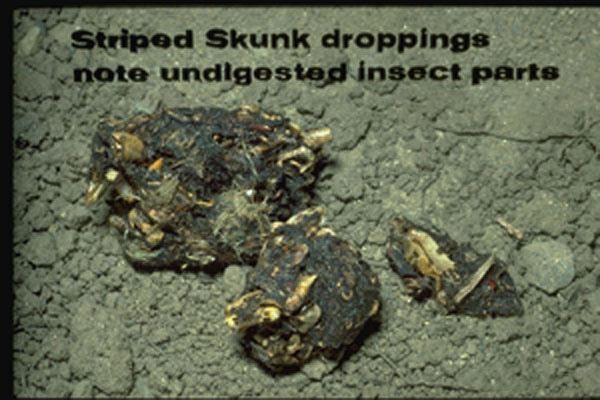 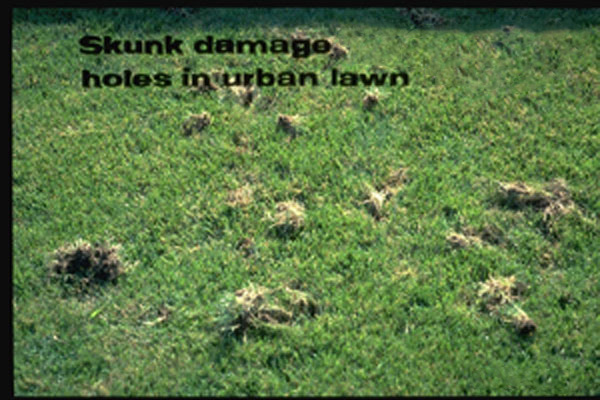 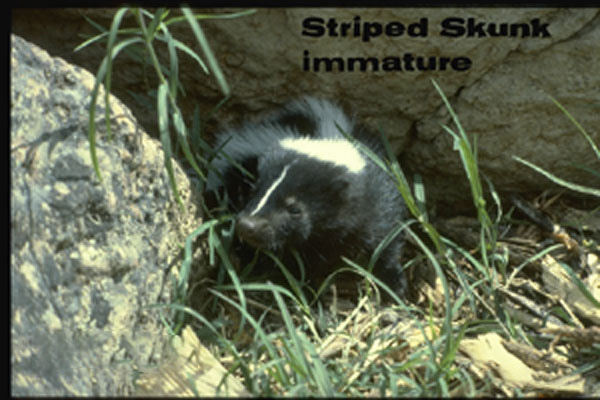 This is a native skunk in North America and ranges from all of southern Canada through every U.S. mainland state and south into northern Mexico.

This is the only species of striped skunk in North America. It is nocturnal and feeds on a wide variety of materials including small mammals, carrion, some plant materials, but primarily insects. Damage to turf is common as the skunk digs for buried grubs and other insects in the thatch. It attacks bee hives and feeds on worker bees that come out to investigate. Around homes it feeds on pet foods that are left out at night as well as on fruits or vegetables in gardens. Like other skunk species it defends itself with a powerful spray of foul smelling oils ejected from glands around its anus. This spray is capable of causing severe nausea, temporary blindness, and even temporary unconsciousness in animals that are sprayed directly. The primary predator of the skunk is the Great horned owl, which appears not to detect this odor. The skunk is nocturnal and hides during the day in a den, which may be in a hole in the ground or within or under structures where it can gain access. The striped skunk is not a good climber but can dig very well to gain access to areas or to go under fences. A litter of 4 to 8 young will be born in late spring. Skunks are often a major carrier of rabies, with a high percentage of individuals in some areas infected with the disease.

The average weight of adults is 6 to 8 pounds and body length is about 15 inches. The tail is very bushy and adds another 8 to 10 inches to the length. The body and tail are jet black but with bright white stripes running lengthwise on either side of the back, leaving a black stripe down the middle. These stripes converge to form a white patch on the back of the head and a white patch at the top base of the tail. Striped skunks in the eastern U.S. may lack the complete stripes along the back and have only a single stripe extending along the top of the head and ending on the neck.

It is important to check with your state wildlife agency to determine the legal status of skunks and any constraints on their control. Many states classify them as non-game animals that may be controlled at any time in any legal manner. Shooting is a common practice. Trapping is highly successful but trapped animals generally cannot be relocated and released due to the possibility of moving rabid animals to new areas as well as the likelihood that they will cause problems in their new location. Working with a local animal control agency regarding the disposal of trapped skunks is advisable. Where the skunk is trapped within or under a structure they may be released on site outdoors and all entry points permanently closed. Exclusion is an important part of skunk management, along with repairing fences to prohibit access to yards and removal of pet foods at night.