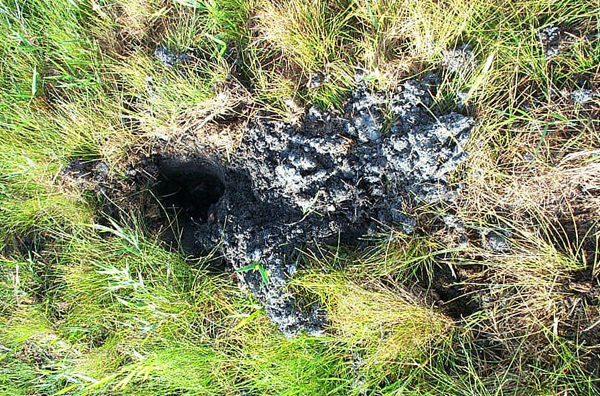 There are two species of spotted skunks that are native to North America, and together they cover nearly all areas of all mainland states and into British Columbia. The western spotted skunk occurs from B.C. south into Mexico and from the west coast east to just east of the Rocky Mountains. The eastern species if found throughout most of the eastern half of the U.S. from the Great Plains to the east coast.

These skunks are much less prevalent around urban areas than the striped skunk, preferring wooded habitats and natural dens in the soil. Young are born in late spring to early summer, usually about 4 to 5 young per litter, and are weaned at about the age of 8 weeks. Musk glands located near the anus produce the foul smelling oil that the skunk sprays when threatened. The skunk will often stand on its front feet to position itself better toward its enemy prior to spraying. These are omnivorous animals that feed on insects, small rodents and birds, eggs, and occasionally fruit or vegetables.

The body color and tail are dark black, but rather than two parallel white stripes along the back the spotted skunks have varying degrees of white spots and patches or bands on the head, back, and sides. They also are much smaller than the striped skunk, weighing only about 3 pounds and an overall length of body and tail of about 2 feet.

It is important to check with your state wildlife agency to determine the legal status of skunks and any constraints on their control. Many states classify them as non-game animals that may be controlled at any time in any legal manner. However, spotted skunks may be afforded some protection in some regions where their presence is threatened. Shooting is a common practice. Trapping is highly successful but trapped animals generally cannot be relocated and released due to the possibility of moving rabid animals to new areas as well as the likelihood that they will cause problems in their new location. Working with a local animal control agency regarding the disposal of trapped skunks is advisable. Where the skunk is trapped within or under a structure they may be released on site outdoors and all entry points permanently closed. Exclusion is an important part of skunk management, along with repairing fences to prohibit access to yards and removal of pet foods at night.