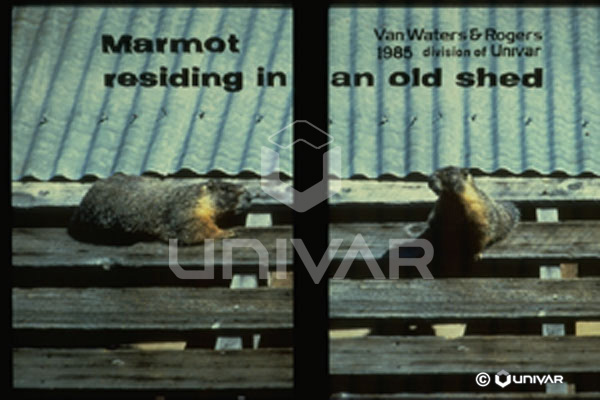 This is a native of North America and is found widely as far north as Alaska, south to Georgia, throughout eastern Canada and the U.S., throughout the central U.S. and western Canada and just touching Washington in the western U.S. This species is the one featured for “Groundhog Day” events.

Unlike some of its marmot relatives the Groundhog prefers to live in grassy, open areas. Adults may grow to 2 feet in length and up to 9 pounds, making them one of the largest of the marmots where they live. Typically in the wild they live only 2-3 years but up to 6 years, their short life span due in part to heavy predation by many other carnivorous mammals and birds of prey. Young groundhogs commonly are eaten by snakes that enter their burrows. Their diet may include insects and snails, but is primarily plant materials such as nuts, seeds, fruit, and crops where their habitat is adjacent to agricultural lands. They live in burrows that normally have up to 5 entrances, providing them with added escape routes. It is this extensive burrowing and the presence of many large mounds of soil at the surface that create problems for people when the animals live near them. Groundhogs hibernate for several months during the winter and produce a litter of 2-6 young in mid-Spring. The young are weaned at about 6 weeks of age and there is 1 litter per year.

These are large ground squirrels that grow to nearly 2 feet in length with a tail about 6 inches long and much shorter relative to its body length than smaller ground squirrels. The front feet have long claws for digging and the body shape is compact and muscled. They have dark brown fur but are also covered with longer, silvery guard hairs that give them a speckled look. Their eyes are located near the top of the head to allow them to peer over the edge of the burrow opening without completely exposing themselves.

Non-chemical methods that may be less effective include the use of frightening devices or repellents. For small garden areas fencing may be installed to keep them out, but they are excellent climbers and the fence must be installed to prevent this. It should be buried at least 12 inches into the soil with the bottom edge flared outward, and at least 3 feet high with the top edge flared outward. Installing an electric wire at the top also discourages climbing. In most states they are classified as game animals that may require a permit to kill. Lethal means include shooting, toxic baits, and fumigants such as aluminum phosphide placed directly into their burrows. Both live and kill traps can be used on small numbers around urban areas, but knowledge of the regulations on releasing them are important.