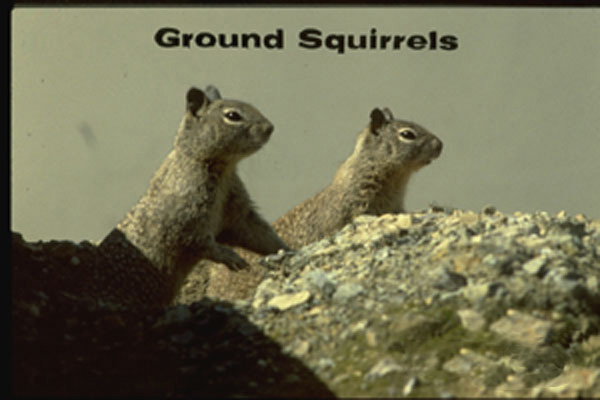 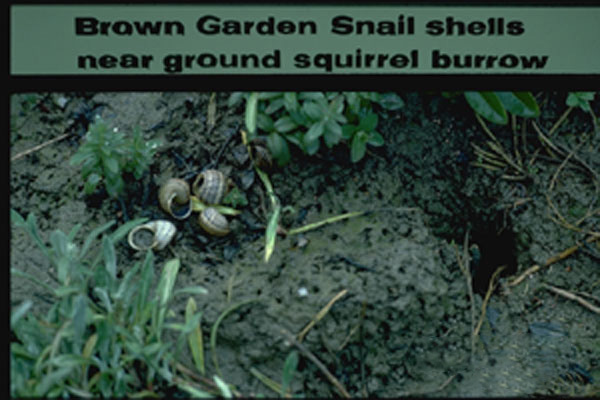 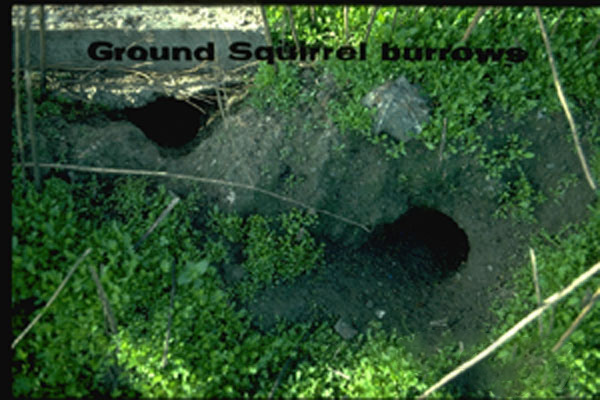 While there are many other ground dwelling squirrels, it is the genus Spermophilus (Otospermophilus) which is the most important with respect to urban problems and damage to other man-made features. These large rodents create extensive ground burrows, often in river or canal banks, weakening the levees and creating potential flooding circumstances. In addition, they are linked as a major reservoir of the bacteria which causes bubonic plague in the West. Ground squirrels are diurnal (day active), feeding primarily on seeds, fruits, acorns, mushrooms, or insects. Their burrows often are dug in and around rock piles or on hillsides, occupied by a single squirrel or groups of males and females in a colonial system. In extreme cases these communal burrow systems may have almost 750 linear feet of burrow, over 30 openings, and go almost 30 feet deep. They usually hibernate for the winter months, although they awaken every few days to feed on stored food supplies. Breeding is in early spring, broods contain an average of 6 young, and there is one brood per year. Ground squirrels live an average of 3 to 4 years in nature, up to 10 years in captivity.

Colors and sizes vary by species, but in general the overall tail length is shorter than the body length, and the tail is covered with long hairs but is not bushy, like the tree squirrels. Color is light grayish brown to darker brown with lighter bellies. Body length also varies, but in the Beechey Ground Squirrel can be up to 19 inches in overall length. They have characteristic poses, such as a “sun-bathing” pose in which they lay on their bellies with their elbows on the ground, or an upright pose on the hind legs, with front paws crossed. When alarmed they emit a sharp, metallic cry or several in succession, and race for their ground burrows.

There are no specific wildlife protections on ground squirrels. Baiting using scattered granular baits is effective, as is baiting near their burrows. Fumigation using aluminum phosphide is highly effective, but relies on ensuring all entrances to the burrow system are closed. Trapping using live traps may be effective for individual squirrels.