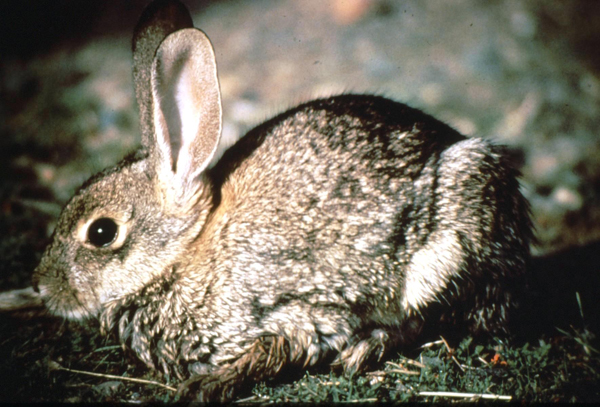 At least 16 different species in the genus occur in North, Central, and South Americas, with a number native to the U.S. and southern Canada. The Eastern Cottontail may be the most common in the east and the Desert Cottontail and Brush Rabbit two common species in the west. In warm regions they breed throughout the spring and summer with at least 5 broods of 4 young per brood. The young (“bunnies”) are independent and on their own at about 3 weeks after birth. They have the ability to live up to 10 years, but due to heavy predation the normal life expectancy of these rabbits in the wild is only 4 to 6 months, and only half of the bunnies even survive to leave the nest. Their preferred habitat is a mix of brush that provides cover and grassy areas for foraging, and agricultural crops are often invaded and damaged. They feed almost entirely on plant materials and even acquire most of their water needs from the plants they eat.

These rabbits are more compact than the jackrabbits and have noticeably shorter ears, which are no longer than the length of the head. The overall body length is from 12 to 16 inches. The fur is brownish and liberally speckled with dark spots. On the Eastern Cottontail there usually is a reddish-brown patch on the collar area and sometimes a white spot on the head. The fur of the western Desert Cottontail is an overall gray with darker streaking.