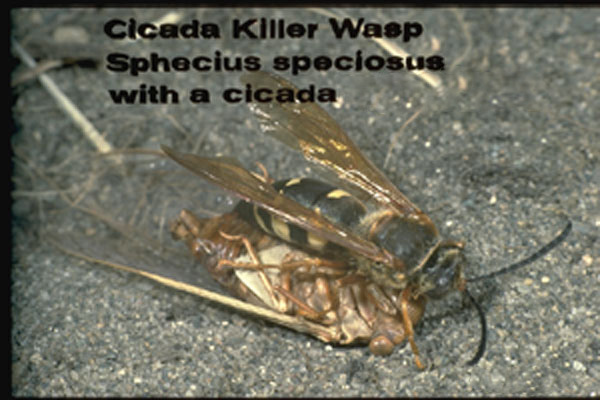 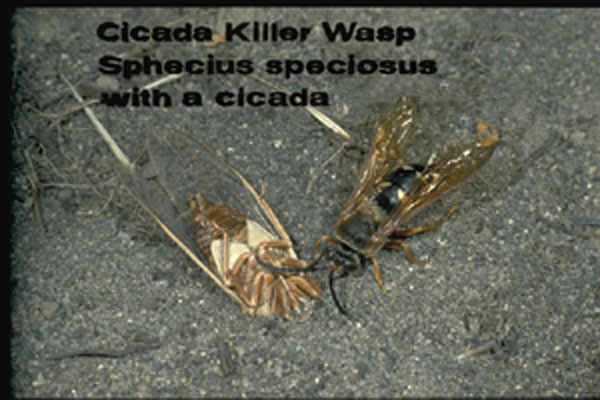 There are several species of these giant wasps in the United States, occurring commonly in states east of the Rocky Mountains and south into Mexico.

This is an enormous wasp, fully 1.5 inches long. It is a solitary wasp which burrows into the soil to create a cavity or its larvae, and then provisions this cavity with a paralyzed cicada which the adult has captured and stung. The burrows can be up to 4 feet deep with several side branches and cells for a number of larvae. Piles of soil are left at the surface around the entrance hole. The fully developed larva then spends the winter in the soil, pupates in the spring and emerges as an adult wasp. The females can sting but are unlikely to do so as solitary wasps. The males can be very pugnacious and curious about intruders, but they are harmless. Control may be needed when large populations occur around playgrounds or when the activity is in well kept turf and causes unsightly piles of soil.

Adult wasps are as long as 1.5 inches, with a black abdomen that has yellow and orange markings on the sides of the last 3 segments. The thorax is brown, with a covering of fine yellowish hairs over much of it. The wings have a bright orange color to them.

Prevention may be accomplished by covering the soil with a thick layer of mulch that discourages digging. Holes may be dusted with an insecticide dust that can penetrate into the subterranean cells, killing adults and developing larvae.