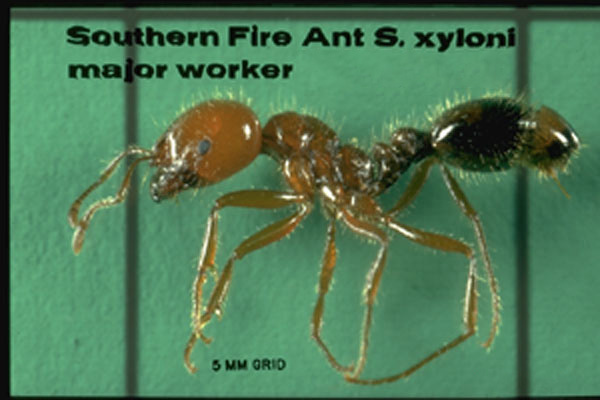 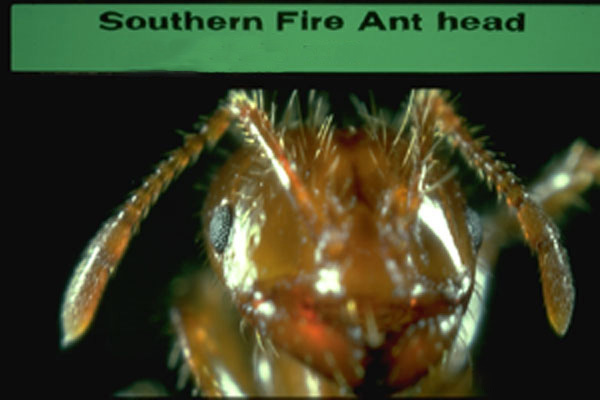 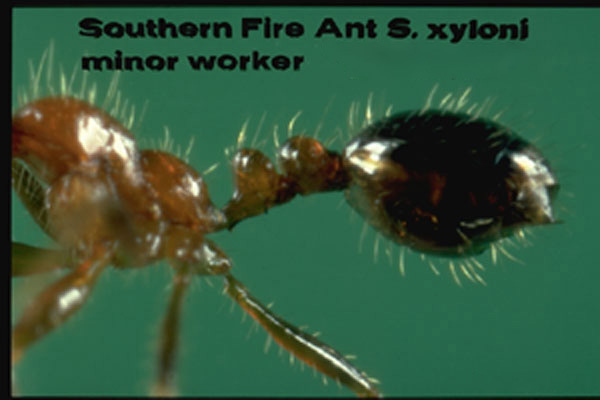 Native to the southwestern United States, and found in California and Arizona.

This fire ant is not nearly the pest and health problem of the Red Imported Fire Ant, but as a double node ant it still can sting aggressively. Nesting and activity are generally confined to the outdoors, but foraging or nesting within a structure does occur on occasion. Nests are commonly located under objects or debris on the soil as well as under slabs. Foods consist of a wide variety of protein and carbohydrate materials, including honeydew, fruit and vegetables, other insects, greases, and grains.

This species is identified by its red head and thorax and red/black abdomen. Long bristly hairs are found over the thorax and abdomen and no spines are on the thorax. The antenna is composed of 10 segments with a 2-segmented club at the end. The Southern Fire Ant may be separated from other fire ant species by the lack of a dark patch on the “forehead” area and no downward-projecting spine on the clypeus between the jaws. In addition, on the front of the two nodes on the waist there is a short spine at the front of the lower surface, and this does not occur on the Red Imported Fire Ant. This is a highly polymorphic species, with various sizes of workers within a single colony.

Baiting is a preferred method of control, and baits with an oil attractant appear most acceptable. Mound injection with dust or liquid insecticide can be effective, but may not penetrate throughout the colony. Physical disturbance and flooding of the mounds do not work. Elimination of unnecessary moisture sources will reduce the attraction of an area for these ants, as well as elimination of food sources and other insects.