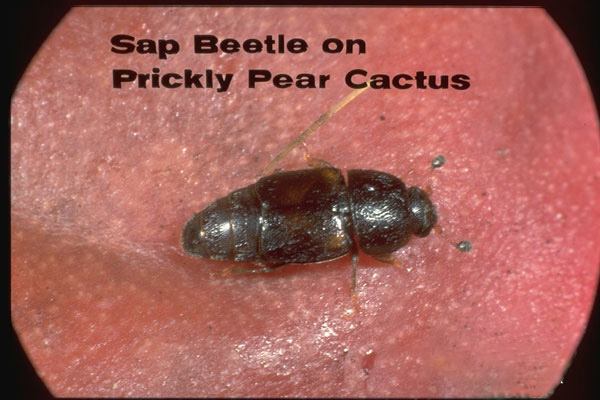 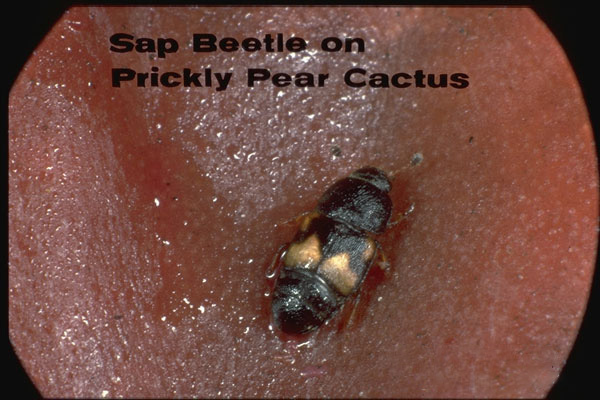 Most species in this group are native insects in North America and they are found just about everywhere there is food material for them. The family is a large and diverse one, with most species being very small, less than 1/4 inch long.

Most sap beetles are found in damaged areas of fruits or vegetables in gardens or orchards. However, some also are important pests in the dried fruit industry as the product is in the process of being dried. In the Dried Fruit Beetle the female can lay over 1000 eggs on susceptible fruits, including those in waste piles. Eggs hatch in less than a week and the larvae complete their development in only about 2 weeks. The pupa stage lasts another one to two weeks, and under ideal conditions the entire development from egg to adult insect can be completed in only 15 days. Overwintering may be done in either the pupa or the adult stage.

Adult sap beetles are elongate and flattened, and have forewings (the elytra) which cover only the front half of the abdomen, although they are capable of flight. The antennae are short and have a distinct enlarged club at the end composed of the last few segments. Coloration ranges from solid black or dark brown to yellow-brown, or black with yellow spots.

Since the adults are attracted only to damaged fruits and vegetables and rarely go after whole, unbroken foods, they are not a problem for well maintained produce. Disposal of the damaged produce is effective, and storage in enclosed refrigerators or other containers will prevent their access.