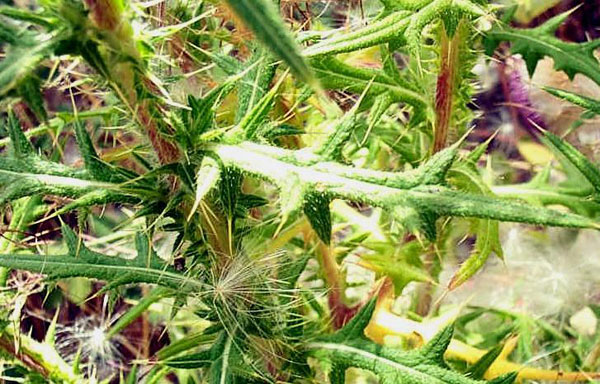 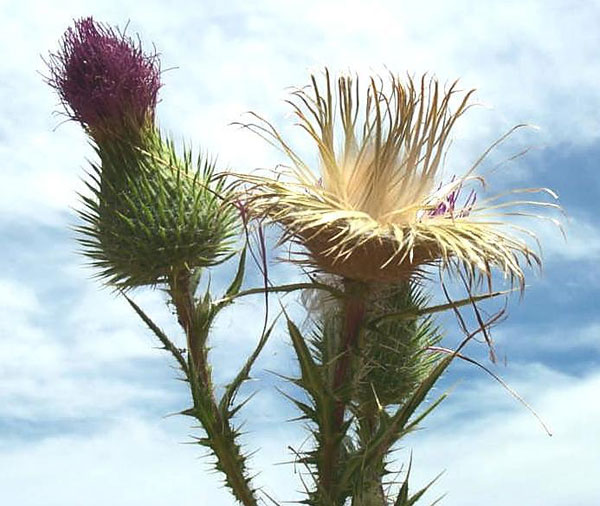 Native to western North America, and distributed from Texas and Nebraska to the west coast states.

A biennial or short-lived perennial thistle, with its principle reproduction by seeds but occasionally also reproducing by tuberous side roots coming off of the perennial root base.

Typical appearance of many thistles, with upright growth to about 5 feet high. Stems may be numerous and arising from the base, with many thinner branches appearing along the upper stem. All stems are densely covered with short hairs. Leaves are large and numerous along the entire stem, growing to 8 inches long with tufts of soft hairs on the upper surface and densely covered with wooly hairs on the lower surface. Leaves are divided into deep lobes that do not reach all the way to the midvein, and the lobes also may have lobed or toothed margins. At the tips of all the lobes there are long, yellow spines. Flower heads are pinkish to purple, and are single heads at the ends of the stems. The large, enclosed bracts are also armed with many long, yellow spines, and the flower head opens widely above this with long, thin flower petals forming a pin-cushion appearance.

A possible perennial root system that can reproduce by root segments, allowing plants to re-grow if they are removed but leave roots behind.